Two years ago, in Calvia, the RP men's team finished in 19th spot. This time around, they drop to 44th with 28.5 points. Australia (posn. 29), Indonesia (posn. 40) and Vietnam (posn. 39) have all placed higher than RP - somewhat mildy souring the RP men's campaign.

Men
Armed with 3 grandmasters, Brazil was never going to be easy. Paragua crossed swords with Giovanni Vescovi and that game ended a draw but not before some incendiary exchanges. The Brazilian's 22. Rxc5 was probably not necessary but it certainly made for an interesting game. With that move, Vescovi gave up the Queen for Bishop and Rook. For some moments in the end phase, it seemed as if Paragua was in trouble. Thank God he drew. 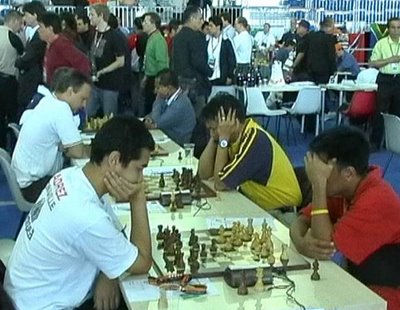 Philippines vs Brazil, round 13 (Photo by Larry Ermacora)
Antonio and Torre also drew their respective games. Dimakiling, who was playing for two kinds of norms (GM and IM) lost his game and thus settled only for the IM version. The match was therefore a win to Brazil 2.5 - 1.5.

Women
Last night, the RP women's side finally had their 6-game unbeaten run ended by Slovenia. RP lost their match 2.5 - 0.5. Pinay rookies, Perena and Cua, who have been the team's heroes, were completely outplayed by their WGM opponents. It was left to veteran Beverly Mendoza to eke out a draw against the strong WIM Jana Krivec on board 3. 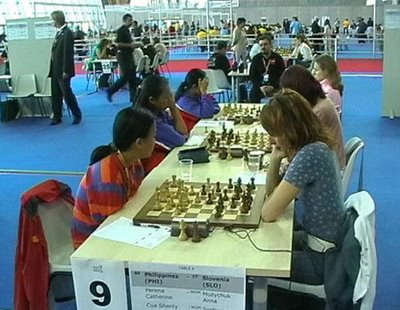 Philippines vs Slovenia, round 13 (Photo by Larry Ermacora)
The Pinays can celebrate, however, for having significantly improved their position in the final standings ladder. In 2004 they found themselves in 48th spot. Thanks to some determined effort, in particular by the team rookies, the Pinays end Turin in 26th position.
Posted by The Closet Grandmaster at 6:11 am

Congrats to the unheralded Filipina chessers! They all made up for the men's shortfalls.

But hey look at the Indian all GM Anand led team finishing in 30th place and scoring just 29.5 pts compared to the RP's 28.5!

The Filipinas are the real heroes of Philippine chess. Their true worth have not been recognized by many so-called experts.

In the 2005 SEA Games, Perena's silver medal was overlooked when it was the best Philippine performnance in the event. The men's side were humbled by Vietnam.

Captaincy and a steady Utut Adianto was the key of the Indonesians' achievement. Their captain is veteran IM Edhi Handoko.

If our women can study a bit harder and work a little more, by the 2007 SEA Games it's impossible not to expect better results.

A good result by the Phillipines womens team,hopefully they can provide more depth to womens chess in asia.

Australian womens team,well they need to work considerably harder if they are going to have any impact on the region.

lackluster performances. some of the philippine GMs are ageing>>> :)