Here for round 10. A bitterly cold day after those summery days, icy breeze blowing from the mountains not good for Ian Rogers' cold, but he's playing anyway. I got some photos for you, but I found that getting into the playing area did not help much. 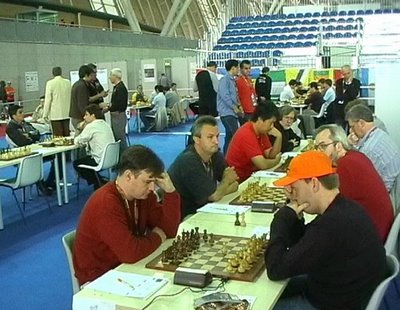 Australia vs Scotland, round 10 (Photo by Larry Ermacora)
Though the top players were in the foreground, they were against the strong light of the Oval's glass wall. You don't seem to use many photos anyway.

I passed by the computer World Championship on the way in. After 9 rounds Shredder and Junior are leading on 6 points, followed by Zappa, Rajlich and Spike on 5.5 then Johnny and Crafty on 4.5.

- Larry Ermacora
Posted by The Closet Grandmaster at 6:03 am

The photos are great, thanks Larry.

The photos are great, thanks Larry.