In their on-going experiment to improve tournament attendance, the NSWCA decided to hold this year's NSW Open at the Hakoah Club in Bondi - a short walk from the world famous beach. With a venue like that you'd think player numbers would go through the roof. Not so. Numbers this year are down significantly on 2005. Just 84 players turned up.

Last year, there were 114 players that included both GM Ian Rogers and IM Stephen Solomon.

We wonder, why such a low turnout? Distance is the likely principal culprit. Travelling from the southwest of Sydney, it took me nearly 2 hours to reach the venue. A jampacked traffic on Oxford St made it worse. For those in private vehicles there is the extra cost of parking fees.

There may be other reasons, too. The football World Cup in Germany, broadcast live into the early hours of the Australian morning, could be distracting some players. Actually, that's my reason for not playing. Plus this horrible cold weather is making it terribly hard to crawl out of bed.

The venue, however, does offer those who drive in with their private vehicles a novel experience. Being a Jewish club, making them a prime target, Hakoah subjects their visitors to a thorough counter-terrorist inspection. Vehicles are checked for bombs. 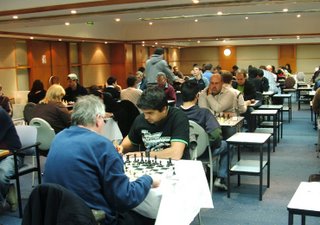 The venue
Top seed for this event is international master Andras Toth (2439), aged 24, from Hungary. He will be in Australia for the next 2 years to work as chess coach. 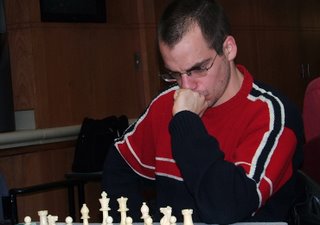 IM Andras Toth from Hungary
Joining Toth at the top are Igor Bjelbork (2369), George Xie (2316), Tomek Rej (2209) and Raymond Song (2195). Also in attendance is WIM Laura Moylan, board 2 for the Aussie women's Olympiad team. Poor Laura must still be suffering from jet lag. In round 2, she sat herself down at the back of the tournament hall and took a quick power nap. That rest must have done her some good as she defeated former world title challenger, Jose Escribano.

That's all for now. For the moment, we have this nice game by Neil Wright against Canberra's Milan Grcic - a sharp and wily tactician.

The Vic Open was a comparatively low turnout too.

What "world title" did Jose ever play for Amiel?

I believe he is referring to some world internet tournament Jose was playing in. Ask the Grandmaster for more details if you're still curious.