This is the first report from our man in Turin, Larry Ermacora. The match Armenia - Hungary ended, well, you be the judge.

Got here before half past ten this morning and immediately came across a sensation or a disappointment in the final round. At the men's top match Armenia-Hungary the players had already left and all four boards showed draws. RAI Italian Television had set up an enormous camera next to this table for live transmission. Too bad for them. Why is this allowed by FIDE? 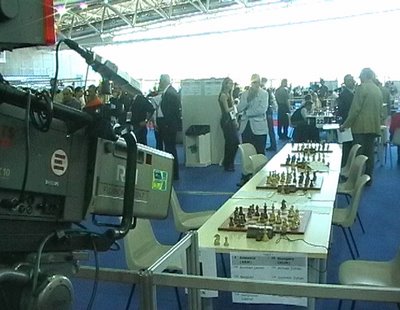 Armenia vs Hungary, round 13 (Photo by Larry Ermacora)
OK Armenia had the gold medal in the bag, but why deprive the paying public of a show?

Larry is a well known personality in Australian chess circles. He was an administrator in both Western Australia and New South Wales. And, in 1990, he was awarded the highly coveted Koshnitsky medal.
Posted by The Closet Grandmaster at 6:25 pm

what a fucking disgrace. This is a grass roots issue, what does Kirsan think of situations like this. I wonder if he was asked about this at the general assembly.

nice avatar you have over at chesschat ggraygray ;) suprisingly similar to a profile pic of someone i know ... ;)

how are you tic? I have changed again :P

TCG, A thought came to me last night. Maybe this Armenia Hungary Top Quadruple Boards Quick Agreed Draw was a subtle protest at the absence of a round 14. Nah! Silly idea! Forget I said it ... :P

Hey,they had the quick draws so they could head down to the pub and find some englishmen to fight!