I had first read about it from David Norwood. In his column last Saturday, Norwood informed his readers that Short's chess column in the Sunday Telegraph had simply vanished. Poof! I wasn't sure about what had happened. But the other day, we finally learn the details courtesy of Chessbase.

Nigel Short's column was axed and to be replaced, apparently, by a second column on poker. Right royally flushed so to speak. Sorry, couldn't help myself. If we must blame anyone, then point the finger at the new editor, Sarah Sands. Atrocious woman! Quite uncultured if you ask me.

But all this has got me thinking about poker. For whatever reason it has become a fad amongst many chessers. The young guns on ICC, in the Aussie channel, are avid poker players. I am completely lost when reading their chatter. It's all Chinese. "Rivers", "flops", "gutshots", fox hunts" and so on.

To understand a little about this poker craze, I thought I'd interview Kerry Stead. Kerry is a current member of the NSWCA, an ACF vice-president as well as a much-loved chess coach in the junior ranks. And, until only recently, he was a professional dealer at the Sydney City Casino! The following is what he had to say.

What got you into poker and when did you get into it?
I'd known how to play poker for a while, but it was just the basics: flush beats a straight, etc. Mostly just playing games like draw poker. Then I started working at the casino and got invited to a few home games with some of the other dealers. [I]t just went from there. You play more, you learn more. Read some things, become a better player.

Why poker?
Why not? In addition to the general strategy of the game, the betting brings in a lot of psychological aspects that are difficult to find anywhere else. Unlike chess, where things can objectively be seen as either a good or bad move, its much tougher with poker: do you have the best hand? How would your opponent play cards that could beat you? Does he have a hand that beats you? Not quite the same as just saying "oh, its mate in 4".

Is poker more difficult than chess?
Its a different skill, although it does overlap a little. You have to be able to calculate a bit, but a lot of it is psychology

I notice that a lot of ICCers play poker, especially the juniors. Is there a risk of permanent loss of these players to poker?
In terms of them not coming back to chess? Of course there is. But it's worse than that with kids playing poker online. It has the potential for problems in the future, which can't be a good thing. The obvious attraction of poker over chess is the money involved. When was the last time you heard of a guy from Melbourne winning $10mil in a chess tournament?

Finally, are there sexy chicks in poker?
Much like everything else, you can find good looking women who play the game, although just like chess, its very much male-dominated in terms of numbers. You're asking the wrong question Amiel. Its about the game, not the looks of the participants! 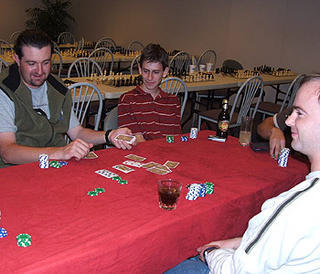 Kerry Stead, seen at this year's Doeberl cup, playing the dealer in a real money game.

My sincerest thanks to Kerry Stead for being a sport and giving me such a wonderful, albeit, brief interview. For loyal fans of The Closet Grandmaster, this will the the first of many interview sessions with wonderful personalities. They will be experts on subjects ranging from poker to sex or even how to cook the perfect rice. Keep on reading!
Posted by The Closet Grandmaster at 3:10 pm