Fairfield is proving to be a happy hunting ground for Igor Bjelobrk. After winning the club's Summer Cup last December, today he won the Winter Cup. His total score was 6.5/7. Igor definitely won the respect of foreign visitor, Sales. The Filipino player considered Igor's play to be quite strong and solid. Sales himself finished outright second. Their individual encounter was a win for Igor. 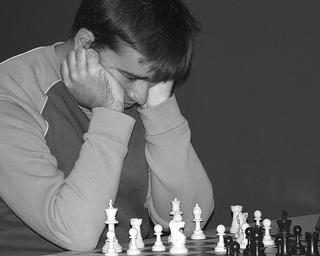 FM Igor Bjelobrk, seen here at the 2005 Doeberl Cup
I was there only as spectator and to take photos. So I had plenty of time on my hands - listening to stories, catching up with a mate. Hec, I even learned that William Shakespeare was Lebanese! Yep, I'm talking about the great man himself - The Bard.

Now that bit of info maybe a wee bit unbelievable, but did you know that Ilja Ilic once beat the great Mikhail Tal in a blitz game? Ilja will also tell you that after a session with the booze, Tal was so drunk that Ilja had to carry him back to his room as if he were a little baby.

After the tournament, Mr Bautista invited some Pinoys over to his place. There we were entertained by Jesse Sales telling stories of Vulture's Park. It is where the chess hustlers of Manila hang out. The usual story. Some fish comes along and wins 10 games in a row. The bet goes up and bang, before the fish knows it, the hustler has won everything except his undies.

One day, some "fish" came along and the unthinkable happened. The fish was unbeatable. His name? Robert J. Fischer.

Jesse was also kind enough to go through his games against GM Antonio and IM Paragua (played at the La Union Open). It was very instructive. From here, Jesse will proceed to Canberra to play in the ANU. Then he will return to Sydney, hopefully to play at Rose Bay, then finally head for Malaysia. The entire Australian trip is funded by Jesse himself. He informs me that trips to some countries like Spain and other Asian countries are eligible for funding from the Philippine Sports Commission. Australia is not one of those countries. But how good is it that this "poor" country can still take the time to support chess? Now there's a cultured people for you. In fact, the government even issues chess players with their own special ID cards. Jesse's reads "Athlete - Chess".

Anyway, here's a couple of games from the Winter Cup. In the first, our friend FM Lee Jones manages to get himself confused over theory. He goes down to Armen in eleven moves. 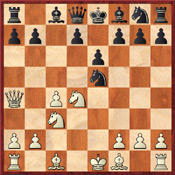 The next game features new comer Aina Musaeva. She is definitely one to look out for and may one day, hopefully, compete for a place in our women's Olympiad team.