Chess By The Sea

But for the small playing hall, Rose Bay RSL would be the perfect venue. It sits just metres from beach. If you're lucky to finish your game early, you can go for a walk along the shore or even hire a kayak. When the sun is out, it's easy to forget about chess. This is the sort of venue where you're always thinking, "what the hell am I doing here?" And today was a particularly gorgeous day. Who would want to be indoors?

Thirty-five players, apparently, had nothing better to do! And myself of course. The turnout was a disappointment. The first prize fell from $500 to just a measly $300. In the third round, I even managed to get a game by playing some guy who had the bye. I won. 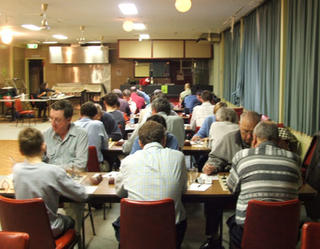 Number one seed is George Xie. He is joined at the top by Sales and Berezin plus a handful of 2000+ rated players: Bolens, Jones, Musaeva and ex top junior, Ricky Lopis. That's the funny thing about chess - anything can happen. In the third round, Xie lost to Lee Jones.

Aina Musaeva. All the way from Vladivostok. She has lived in Australia for only seven months now and plans to stay here permanently. I've already told you about her accent, right? Well never mind then!

By the end of round 4, Sales and Berezin were the only undefeated players. They play in round five. The Pinoy player had a slight scare in the second round. Playing against Ben Ingram, Jesse got a little confused over the time control (60 mins then 10s/move) and allowed his in time lead to dwindle down to just 48 seconds. Luckily for Sales, his hustling skills, no doubt honed in the backstreets of Manila, came to the fore. Ingram was a little too slow and played poorly under intense time pressure. Below is Sales - Bolens in the third round. 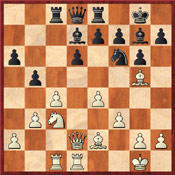 Jesse then had to face Ricky Lopis in the fourth. By his own admission, Jesse played the Black side of a Slav terribly badly. However, the young Aussie committed some inaccuracies in the middle game and lost a piece. Meanwhile on board 1 Berezin defeated Lee Jones. 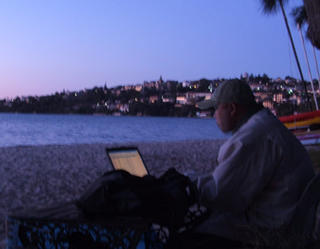 Jesse Sales. Preparing against Xie, by the shore at sunset.

For more photos please visit my Chess Aficionado site or The Kibitzer. Come back tomorrow for what we hope to be an exciting finish to the tournament and maybe a game or two!
Posted by The Closet Grandmaster at 9:41 pm