Look, let's be clear - we Pinoys are nice people and definitely good neighbours. But when it comes to chess, it's all war baby! Last night's round 10 match-up between RP and Malaysia was possibly the one that got me all nervous. I don't know what it is. Maybe it's a neighbour vs neighbour thing. But thank the high heavens, the Pinoys won by a whopping 3.5-0.5. Sorry Andrew! 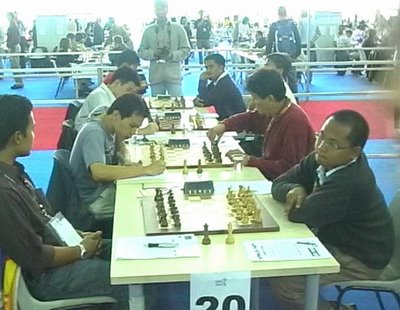 RP vs Malaysia, round 10 (Photo by Larry Ermacora)
The only blemish in RP's victory was Torre's draw against FM Lim. However, what this draw apparently means is that Lim has now secured his third and final IM norm. Congrats to him.

Play through the games here.

What have the Pinays been eating? For some special reason the RP women's team are playing well in this Olympiad. They just wiped out Albania 3-0 last night and will now front up against the powerful Lithuanians. Good luck ladies.

The Australian men's team lost their match to Scotland 2.5-1.5. GM Ian Rogers took a quick 14-mover draw against world famous writer, GM Jonathan Rowson. Australia's only point was secured on board 3 by the big man - IM Alex Wohl who posted his fifth win a row. Well, what has he been eating?

Both IM Zhao and IM-elect Nick Speck lost their games. The latter may be benched for the rest of this event. That was his fifth straight loss! The Aussie men's games are here.

It seems that shopping therapy is not enough. The Aussie women went down to Moldova 2.5-0.5. Only Irina Berezina, on board 1, managed to draw. I don't know what these girls need but it ain't shopping. 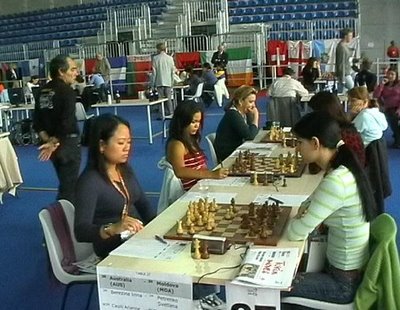 Australia vs Moldova, round 10 (Photo by Larry Ermacora)
Round 11 pairings

Maybe Alex Wohl has given up smoking and drinking for the olympiad. haha

It was a painful loss for Malaysia but we have improved tremendously. Remember we were not even in the top 50 last Olympiad whereas the Pinoys were top 20.

I have to admit Philippines is definitely a class above Malaysia.

Interestingly Malaysia is currently ahead of the men's Aussie team by one position..