Round 12 today, so we are close to the end. In fact the area next to the Olympiad Hall is being prepared for the Closing Ceremony at 6.30pm tomorrow night. The last round will start at 10am tomorrow.

Armenia is pulling ahead in the Men and just about got it in the bag. In the Women Ukraine is at the top but not by a big margin. A winner, and by a big margin, was Kirsan Ilyumzhinov who will be President of FIDE till 2010 to the regret of some. I attended the General Assembly yesterday, spending six hours there, three of which were spent watching an empty stage while proxies, signatures, etc were being checked in a back room and the fate of Uraguay, Peru, Bosnia decided: could they vote or not? That became a heated issue, settled by a timely and cool Presidential intervention. I must say I thought Kirsan in his speech and general countenance was impressive. He seemed very relaxed. Perhaps he practices yoga.

The Philippines had declared before the election that they supported Kirsan. Australia had not. I noticed the Hon. Former President Campomanes seeking out Phil Viner, no doubt to do some hard lobbying. Garry Bekker was there too, looking rather dapper and spreading bonhomie amongst delegates he knew. I decided good delegates are chessplayers who look comfortable in a suit and tie. Bald heads qualify too: that, it has been proven, is a sign of intelligence. There were many bald heads there and few women.

Sorry I didn't get my report in yesterday. I prepared it, but then my computer decided to go on strike, froze and what I had written was lost. I'm afraid I had to call it a day and chose to go to dinner with the Rogers, Manuel weeks, Tim Reilly and others at an Italian restaurant outside the Olympic Village. Highly recommended by Ian and Cathy it turned out pretty good. Food in the Village varies from very good to fairly awful. Ian thinks it's just awful. He has a number of other complaints about the Village. All I can say is The Olympiad requires a gigantic organisation, including an army of volunteers: don't you in Australia ever think about getting involved!

Today the male Australian team plays the Faroe Islands. I'm afraid our team has been losing ground. The loss to the Dominican Republic yesterday was particularly bad for us as David Smerdon lost his chance of scoring a final GM norm and now Alex Wohl won't get strong enough opponents in the two remaining rounds to score his GM norm. The Aust. Women are doing better. Today they face Italy A. So I will have divided loyalties. 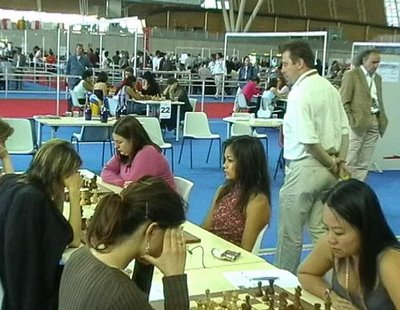 Australia vs Italy A, round 12 (Photo by Larry Ermacora)
I notice that Arianne Caoili, who was not playing yesterday, is on board 2 today. She's created quite a stir outside the Olympiad Hall by encouraging a competition of another kind amongst some top male players by playing one against the other. I don't listen to rumours much but it seems that no less than Aronian was punched by a rival while dancing with Arianne. 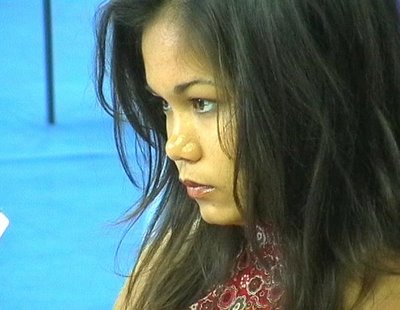 WIM Arianne Caoili (Photo by Larry Ermacora)
Amiel I'm afraid that Alexander Morozevich has given up wearing his wind cheater jacket, as it's now too hot for it. I have it on good authority that yes the emblem on the blazer is Australian. Apparently he visited Australia. No, I don't know but probably yes, Arianne may have something to do with that too. She's half Filipino I heard, so it's all your fault. Hot blood.

Larry is a well known personality in Australian chess circles. He was an administrator in both Western Australia and New South Wales. And, in 1990, he was awarded the highly coveted Koshnitsky medal.
Posted by The Closet Grandmaster at 10:57 pm