Like many of you I was shocked and saddened by the sudden passing of Arianne Caoili. Her husband, Levon Aronian, announced the news on Twitter.

Most of us knew her as a chess player.

But she was also a dancer. A singer. Lately, an accomplished career woman and a philanthropist.

She was a friend to many of us.

In the weeks before her passing, Arianne, like many people, was clearly concerned about the ongoing global crisis. Her social media accounts highlighted and, indeed, implored her friends and colleagues to maintain what is now a familiar call, "social distancing". I think that she might appreciate that we all listen and do this one small act.

Vale, Arianne. We will miss you.
Posted by The Closet Grandmaster at 5:03 pm No comments:

In case you've been somehow unconnected with today's social media sites or online forums related to chess, then you might have missed this.

Congrats to them both.

Posted by The Closet Grandmaster at 12:03 pm No comments:

I am so very upset this morning to have learnt of the untimely passing of my friend Malcolm Pyke. We happen to be friends on Facebook, too, and over the last few days I'd enjoyed his regular photo updates of his trip in Portugal. So this news has come at a complete shock.

I don't remember now exactly when I first met Malcolm, possibly in one of the many events I used to play in, but it was in the 2009 Queenstown tournament, in New Zealand, that we hit it off. After the rounds, we'd play blitz late into the evening before hitting the local nightclubs at close to midnight!

Malcolm absolutely loved to dance. He had this funny groove that made him the center of attention, with cameras snapping in his direction. The girls loved him!

And he loved to sing, too. One night, surrounded by Kiwis, he damn nearly got us ran out of town.

That is the Malcolm Pyke I know and will always remember. Full of life, with a big smile and boisterous laugh.

In 2008, Malcolm achieved what must be his greatest accomplishment in chess - winning the Melbourne Chess Club Championships, ahead of the likes of Guy West, Mirko Rujevic and Doug Hamilton. He annotated his game against Hamilton for this blog following the event.

Farewell Malcolm. Farewell my friend.
Posted by The Closet Grandmaster at 11:57 am No comments:

I'm pretty sure that there's a chess connection in this video. But you'll need to look very closely.


Posted by The Closet Grandmaster at 12:54 pm 2 comments:

So, So Bad To Lose on Forfeit

After many weeks not paying much attention to any sort of chess-related news (I even missed Doeberl!), this morning I logged on to Chessbase.com only to be shocked by the first thing I read. ICYMI, Wesley So lost a game on forfeit in the ongoing US Championships! Even more shocking to me was the reason.

After having been warned on two prior occasions to desist, So was forfeited for taking notes! Incredible stuff, especially at this level, and particularly for a top-tenner whom many believe will one day vie for the world crown.

To be clear, the notes were self-motivational reminders, but FIDE's rules allow no doubt - these notes are a no-no.

Despite what his diehard fans might say, Wesley So is absolutely at fault. He broke the rules. The two prior warnings make his situation even less defensible. And, no, claiming he didn't know the rules won't cut it either.

GM Jan Gustafsson had it right:


Note to self: Don't write notes to self during a chess game.
— Jan Gustafsson (@GMJanGustafsson) April 11, 2015


As if all that wasn't bad enough, there are what seem to be some unsavoury details pertaining to Wesley's family. It's not looking good.

Posted by The Closet Grandmaster at 9:36 pm 2 comments:

NZ's Natasha Fairley in The Bachelor

This is a bit unexpected. New Zealand chess rep, Natasha Fairley, who I'm sure plenty of Australian chess players know very well, will appear on local television in NZ as one of the young women who will vie for the affections of "The Bachelor New Zealand". The show will begin screening on March 17. If you're outside of NZ, I guess there's always the recaps on YouTube.

I suppose I should say good luck to Natasha. I hope she gets her man. But honestly, I never thought she'd be the type to be needing to do this sort of thing. She ought to be "The Bachelorette"!
Posted by The Closet Grandmaster at 10:55 pm 1 comment:

The past week has been a Chinese trifecta. Zhao Jun won the Hastings tournament, Ni Hua pulverized almost everyone at the Aussie Open and then there's also Zhao Xue who bagged the Kiwi Open. The two Zhaos winning were complete surprises. After all, they weren't exactly the favourites.

But here's another surprise. Out of the blue, I've just learnt that Australia's WIM Alexandra Jule is a New Zealand champion! Well, joint champion at least anyway. It turns out that she holds dual nationality, Kiwi and Australian. And by virtue of her 6 points, among a group of locals on a similar score, WIM Jule is officially a national champ. How about that?

Congrats WIM Jule.
Posted by The Closet Grandmaster at 9:25 pm No comments:


I meant to post something about the ongoing Aussie Chess Open much earlier, but with the rush to head back to Tokyo and immediately having to start work after a very non-Japanese 3-week vacation, this post is much delayed.

In fact, I actually turned up for the first round and live tweeted direct from the event. That was a first for me (live tweeting), and I think more events should probably do it. Tweeting, or live blogging as I once did many moons ago, always gives an extra dimension to a tournament. Despite recent advances in video coverage, there's something about the burst of text that is quite exciting. And after all, not every board can be viewed live and not every tournament can afford video coverage. Tweeting is cheap and easy. All you really need is a smartphone.

Anyway,  if you're not already following yours truly, you can find me here.

My impression is that this Aussie Chess Open has been reasonably well-organised. I could certainly appreciate the organisers' enthusiasm. The venue itself, Castle Hill RSL Club, is very good. The only problem is that it is pretty damn far! Perhaps it's not such a problem if you have private transport, but for those many who must rely on what passes for public transport in Sydney, the trip to Castle Hill can be a real trek. Door-to-door from south west Sydney, it took me almost 2 hours to reach the venue. It was exhausting!

That wee complaint aside, I've really enjoyed following the tournament by remote.  Lots of exciting games, especially by Australia's young guys. I particularly enjoyed the finish of Morris - Jones. Thankfully, we have a video of it courtesy of Gary Bekker. Although, it must be said, I'd have much preferred the, ahem, CM simply let the IM do most of the talking.

After 8 rounds, the Chinese super GM Ni Hua leads with 7.5 points followed by Khusnutdinov on six and a half. Not too far in the chase on 6 points apiece are Aussies Illingworth, Cheng and Schon. The latter is doing very well, indeed, for, as I understand it, he's bagged an IM norm. I'm no expert on the rules for norms, but here's hoping that a local or two will earn themselves the more coveted GM norm. That would be nice.

Posted by The Closet Grandmaster at 2:34 pm No comments:


Look what I spotted in Sydney's Pitt St yesterday. When I saw the chess boards, my first thought was that Pablo Williams, The Jamaican Champion, must have expanded his operations! You can usually see him here this time of year. But, nope; no Pablo. This bloke who's hosting the simul is, in fact, none other than Sydney local Jason Chan. 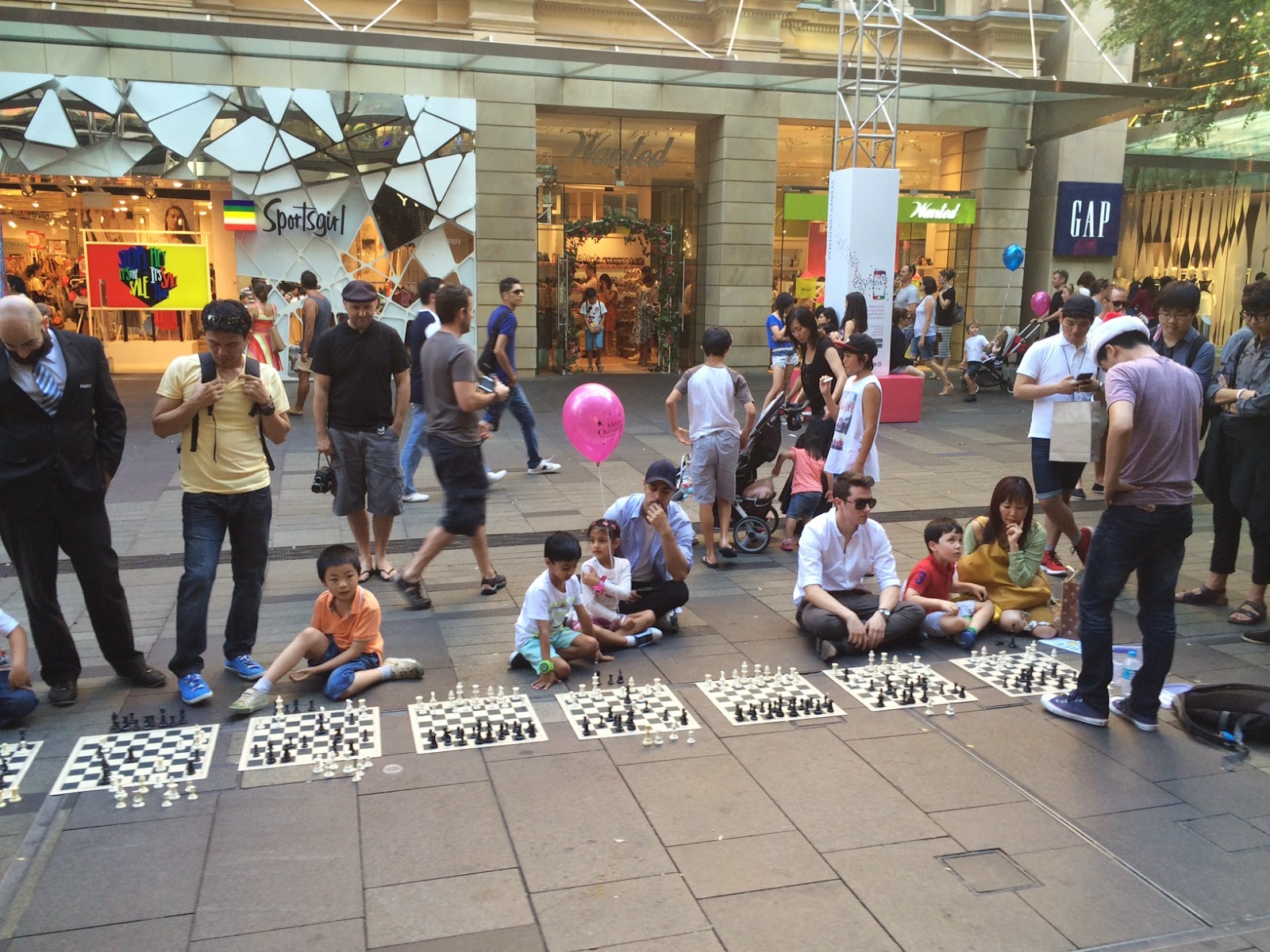 Posted by The Closet Grandmaster at 5:44 am No comments: 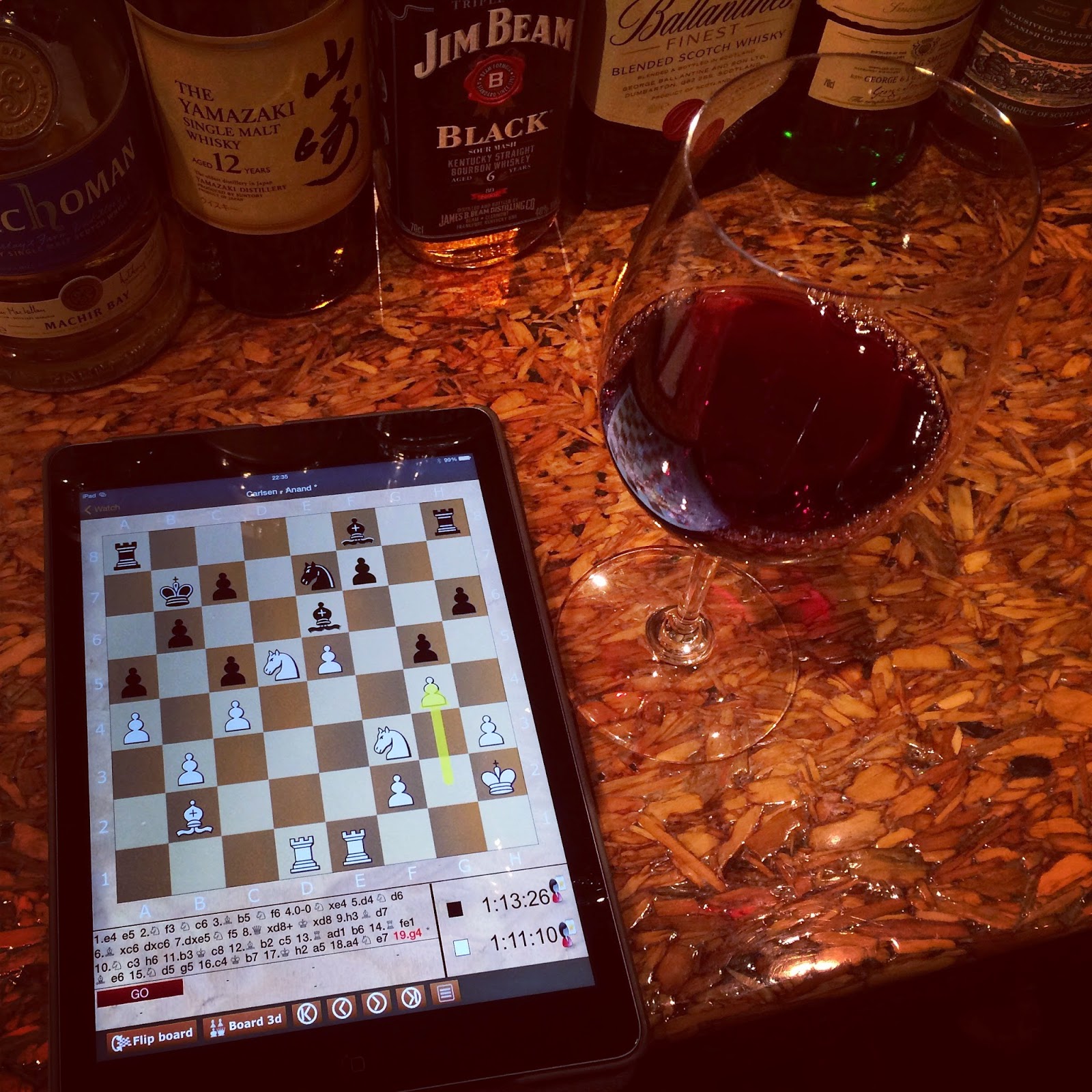