Thanks to Jenni Oliver we have an update from the 2006 Ergas Training Squad. We even have a couple of photos which I've now added to my Flickr photo stream.

The good news is that Mr Ergas has confirmed funding for the program in 2007. 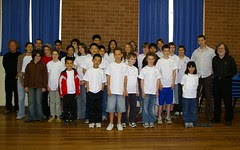 Click on photo for larger image
Jenni also reports that last night, one president, 2 GMs and at least one IM were apparently watching a particular dancing performance on television. I'm sure they would have been disappointed by the judges' score.
Posted by The Closet Grandmaster at 6:04 am