While the whole chess world are all agog over the events in Elista, Aussie chess fans have another chess story, sort of, to keep an eye on at least for the next few weeks. That is, the progress of Arianne Caoili in Dancing with the Stars. Feedback from last Saturday when I visited the Ryde-Eastwood Open was definitely on the upside. A mother of a NSW junior even called out for an emergency copy of the first show because her son, evidently an avid fan of Arianne's, missed last Tuesday's performance.

Tomorrow night, at 7.30PM on channel 7, will be Arianne's second performance on the show. TCG understands that Arianne and partner Carmelo have a "big number" coming up. 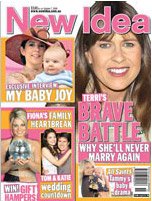 And in this week's issue of women's rag New Idea, Arianne and other members of the show appear posing for a spring fashion photoshoot. They look like a bunch of wannabe upper class New England tossers. Home & Away's Chris Hemsworth, for example, appears exactly like what former Labour leader Mark Latham calls "nervous wrecks, metrosexual knobs and toss bags".

I mean, what is with that sloppy joe wrapped around his neck for crying out loud? Who does that these days?
Posted by The Closet Grandmaster at 10:10 am