Just one more post on Doeberl. Here's a picture of Rogers, Mikhalevski and Timoshenko in post game analysis of the last round board 1 encounter. With them are IM Stephen Solomon, who later demonstrated a drawing maneouvre for White (by keeping the f-pawn on f2), Norwegian visitor Emil-Lion Nomat and Lloyd Fell, who attended his 45th Doeberl Cup. 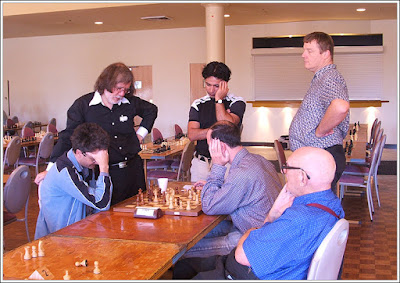 And the last crucial moments of Mikhalevski - Rogers that the Aussie number one won in very fine style - just beautiful! 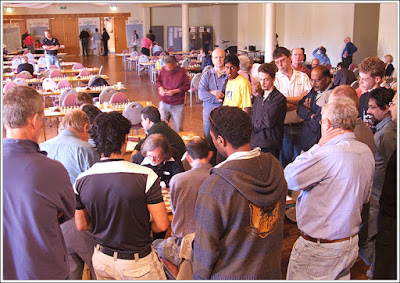 Rogers took home the total prize of $5,001. For a lot of people this was a most impressive result. A common theme in post event commentaries was that Ian's victory really proved that Aussies have the talent. Well, of course!

As for the tournament conditions overall, I did prefer the mixing of the premiere event with both the major and minor. Still the big problem, I think, was the lighting. In some sections of the playing hall, especially the majors top boards, the situation was very bad. Most importantly, it's quite disappointing that this big tournament doesn't have live internet coverage. I should be clear - this is not the organisers' fault. The Italo Club is just not up to scratch, at least, in this respect. Well, who knows, there might be change of venue for next year as Shaun Press hints at here and perhaps also a readjustment to format to allow for norms.

I have now uploaded photos from today's round 7. And some early batches of games can be viewed and downloaded from OzBase.
Posted by The Closet Grandmaster at 9:19 pm