City of Sydney - Round 7

Learning opening theory is supposed to save you time so you can spend most if it in the middle and endgames. You trot out the first dozen or two moves and only then get down to the real business. OK, so you're happily promenading along a main line Sicilian thinking you're a regular super grandmaster. Isn't it boring? Where's the chess in that?

The tournament's favourite and top seed, George Xie, arrived late for his game against Nick Chernih. As soon as he sat down, the two players banged out their first 24 moves in quick succession. They were playing so fast that a large crowd quickly gathered and wondered what was going on. It was all theory and no time was wasted.

Unfortunately folks, I don't have this game - but we'll try and get it.

We do have the game score to Song, R. - Bird. The now world famous giant killer continues on his winning form by this time defeating the current NSW state champ Andrew Bird. Raymond thus extends his lead over top seed FM George Xie by a full point. The young man must have been inspired by our special visitor last Sunday, none other than local supremo grandmaster Ian Rogers.

Andrew Bird dropped a rook late in the game and that quickly brought his position to a flatline. As usual, the state champion found himself in time trouble, but as he himself admits, his situation was already difficult.


I first read about Patrick Halpin in GM Rogers' legendary book, Australian Chess into the 80's. And the first time I met him was in Peter Parr's shop, not far from the venue, some years ago. He strikes me as a bit of a larrikin yet also a no bullshit sort of a man. That bald head is sometimes intimidating. But he's friendly enough and always willing to show off his game - a win or a loss.

Against WIM Laura Moylan, Halpin relied on his old workhorse, a weapon from his youthful days - the GP Attack against the Sicilian Defence.

Most of us normal people will write in either blue or black ink. But these two combatants prefer something else entirely. Laura was recording her moves with pink ink. She said to me, "He was recording his moves with purple ink, so I used pink". Makes sense to me.

Here are the last few moments of my date with Herman Rachmadi. 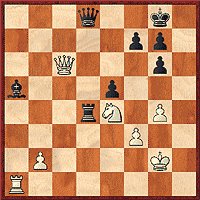 Readers and players are reminded that there is no play next week. Apparently, the venue was double booked. And the following weekend, of course, is the Doeberl Cup long weekend. So we'll see you all in three weeks - but I hope to catch up with some folks in Canberra.
Posted by The Closet Grandmaster at 7:52 am