After 14 attempts and playing in every Australian championship since 1982, international master Stephen Solomon today finally became an Australian Chess Champion. He finished the event with 8 points.

In his speech, the shy Queenslander thanked his parents whom he rang immediately after it was certain that he'd won the title. "Solo", as he is fondly known, later also added: "I'm very, very happy".

IM Solomon's score (along with Brazilian IM Herman Van Riemsdijk) was actually a half point less than GM Dejan Antic's. But Dejan, who is from Serbia, is ineligible for the national title as he is neither an Australian citizen nor a permanent resident.

While he goes home sans the Australian title, Dejan does receive a cheque for $1,500. He was humble in his speech. Said he: "I was lucky again. What can I say?"

The likable grandmaster also thanked his "great fans" Dr. Vasil Tulevski and his family for helping him stay in Australia. As we reported late last year, Dejan was denied his permanent residency status by the Australian government. His struggle to remain in this country continues.

Today, dozens of local supporters signed a petition on behalf of GM Antic. The petition reads: "We the undersigned players participating in the 2008 Australian Chess Championships call on the Migration Review Tribunal to grant Grand Master Dejan Antic residency in Australia on the basis of his ability to coach and impart his considerable chess knowledge on this and future generations of Australian chess players".

Let's hope that those bureaucrats can wake up and smell the roses! 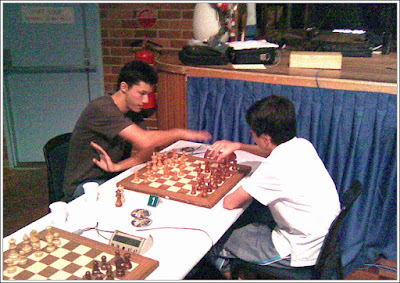 James Watson v Kim Yongtae in the rapid playoff (Photo taken with Nokia 6500 cell phone)
Finishing on 8.5 points apiece out of eleven regulation games, James and Kim played 2 rapid games of 20 min + 10 secs (from move 1). The Korean won the first, but James quickly bounced back and won the second. The lightning phase was all Aussie. James won on time in the first game and forced a resignation by Kim in the second. Well done James.

Minor
Newsouthwelshman Bob Liang won the section with 9 points, followed by Howard Duggan on 8.5. Howard, by the way, did a most commendable act. He took to the microphone and thanked the organiser Shane Burgess. That was nice. And in third place is New South Wales Chess Association councilman and fellow blogger Trent Parker who collected 8 points in total.

ACF Medals
During the closing ceremonies, ACF president Gary Wastell announced this year's recipients of both the Koshnitsky and Steiner medals.

The 2008 Player of the Year is international master Zong Yuan-Zhao. Mr Wastell said that it was a close finish between the 3 nominees. Congrats IM Zhao who is, by the way, playing in Sevilla and has 5 points after eight rounds.

I should also thank Mr Wastell and the ACF for selecting yours truly to be a selector for the Steiner.

Note that nominations for the Whyatt Medal (Problem Composition) are still open and will remain so until the Doeberl Cup. Nominations may be submitted directly to the ACF or via your state chess body.

Before we close, many thanks to the organisers for their very open attitude to my activities. I had complete access to games and results. Very professional.

That's about it all. I had fun blogging about this event and hope you had fun reading. I did notice that my traffic has shot up significantly in the past two weeks. I think that this marriage between the net and chess events is just unavoidable. It's essential these days for big tournaments to have live coverage or, failing that, very fast updates. Chess fans seem to be particularly hungry for information. That's certainly been the feedback to me from a few readers.

Yet there is really so much more we can do with the net these days. I'm thinking podcasts, even live audio! And all can be done for free. But that will be for next time. Our next big event to cover will be Doeberl. I just hope they have net access from the venue.

Adios from Parramatta.
Posted by The Closet Grandmaster at 5:25 pm

Thanks as usual for the great coverage - much better (and quicker) than the official site. :)

Just wanted to add our thanks for all the great reports during the champs. Being far away it made a big difference to our enjoyment of the event!

Thanks AR for your excellent coverage of this event.