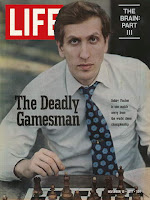 I've just literally walked back in to my house and the first thing that I heard is that Robert James Fischer has just passed away aged 64. This is fresh news so I'm just dumping here the first few items on Google News.

Other interesting links (I'll update these over the next few hours)
My 60 Memorable Games in PGN - www.chess.com
My 60 Memorable Games/Fischer - www.chessgames.com
Bobby Fischer in Wikipedia
The game that shook the world - from www.chessbase.com
Interview with Bobby Fischer - www.youtube.com (Also available on YouTube is an audio recording of that infamous interview that Fischer gave to a Philippine journalist post 9/11. You can find other Bobby Fischer related entries in YT here.)
Fischer Fury - by Edward Winter (with thanks to Dr Kevin Bonham)
Robert James (Bobby) Fischer, by Bill Wall
Bobby Fischer: Profile of a Prodigy (via Google Book Search. You might need a Google account to view this)
Federal Grand Jury Indictment of Bobby Fischer
The Bobby Fischer Unofficial Homepage (Very comprehensive)
Bobby Fischer dies in Iceland - Chessbase
The Battle of the Brains Time Magazine - (first published on 31 July, 1972)
Posted by The Closet Grandmaster at 9:08 pm

Goodbye, Bobby! You were one of the greatest chessplayers ever. We'll always be missing you.

Wow! Fischer dead on the 64th square! What a sense of humour!
I must be one of millions whose eyes were opened to the world of the Lopez, Najdorf and K.I.D by one man - 'Bobby Fischer'. Since those now ancient 6 o'clock news clips, I've made some close friends and many acquaintances through my sporadic forays into competitive chess. Thank you Bobby.