Quick update from Parramatta. If you were watching the Boyd - Antic game online and noticed a slight disruption, it was because their clock had to be substituted. The original one was faulty.

Among the other games, the only one of particular interest to me so far is Illingworth - Lane. But this is only because I happened to speak to Max earlier in the day during his preparation. At the time, he was looking at the Dutch Defence. Lane, in fact, opened with the Nimzo. The choice may turn out to be a bad one.

About 30 minutes ago, Mrs Illingworth asked me what opening Max and Gary are playing. I said it was the Nimzo. She said, with a big smile on her face, "Oh good!" It seems that Max has been studying the system and, Mrs Illingworth assures me, knows it quite well. Perhaps she's right. At this time of writing, Lane is already 30 minutes behind on the clock.

Briefly joining me and Mrs Illingworth was my friend Ascaro Pecori. The guy gave me my quote of the day so far. Chess, he said, is "such a heartbreak". I think I understand perfectly what he meant.

Off to lunch for now. Before I go, here's a photo I took just before the start of play this morning. I'm afraid that it's one of only two that I managed to take. My damn batteries expired! 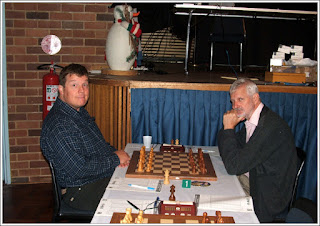 Solomon - Van Riemsdijk
And news just in. Gareth Oliver wins on forfeit while David Hacche has beaten Romeo Capilitan.
Posted by The Closet Grandmaster at 11:03 am

israel yadao has withdrawn from the championships hence the oliver forfeit - i'm not sure he's told the right person (ie. the arbiter) however.