FM Jesse Sales (pronounced "SAH-LESS") ends his Australian tour on a high note with a win at the July Weekender in Rose Bay. He was undefeated throughout - conceding only a friendly draw against Lee Jones in the last round. Bolens secured the second spot by downing Ricky Lopis, while Victor Berezin was third.

Jesse now heads back home to the Philippines where he works as a chess coach and is also apparently writing a chess book for juniors. As for the book, I've already got myself roped in to promote the thing!

Like many seasoned chess players, Jesse sure has some stories to tell. He will happily tell you about his encounters with the top masters in the Philippines - the wins, the loses. Or about that time when he asked a super-GM for an autograph then promptly beat him while the signed magazine was actually sitting there on the table! Even more remarkable is that Jesse had prepared for the game only 15 minutes before the start of play. In those days, he didn't have a laptop - so he ran to the bookstall and quickly checked a game in Informator. He saw a game, played 1. e4 for the first time, and BANG(!) - he won. But what I found especially wonderful was Jesse's readiness to give a tip or two on playing better chess. "If a player is good in opening and middlegame, then test his endgame" or "if my opponent has better position, then he must do something - or else I will come back and make counterplay" were two such tips directly prompted by his match-up against FM Xie.

The tournament ran smoothly overall. However, the time control caused a little confusion. In the last round, Aina Musaeva didn't know what to make of the negative symbol. When is one supposed to lose on time? What's worse is that the time control had actually been changed from the advertised "60 minutes per game plus 10 secs per move" to "60 minutes then 10 secs per move" (setting 12 on DGT). One player, especially, became quite agitated and resorted to accusing the DOP of "double standards". He thought, wrongly, that everyone else got the 10 seconds increment while he didn't.

Finally, a word about the venue. As gorgeous as the setting may be, I suspect most players realise that Rose Bay RSL is way too small. If there were twice the participants - the place would have been packed. Uncomfortably. Overall, it is not an ideal location. Besides, the beach outside is too distracting. 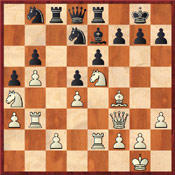 To play through this game, click here.
Posted by The Closet Grandmaster at 8:08 pm