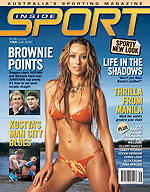 In a mainly unsympathetic article (the Gaft v Beaumont incident is mentioned), Inside Sport magazine has a special report on the Mt Buller Australian Open tournament. Check out the August 2005 issue with the absolutely delicious Jade Garel on the cover. See pic on the left.

I won't ruin the suspense but here's some funny lines. "There's GM Hans-Joachim Hecht, a German Ken Done with a moustache, boat shoes and a very bad shirt". And in describing our Malcolm Pyke, "a dead ringer for a flame-haired Ming the Merciless".

Do you have a transcript of the article, perchance??

No, I don't. But, if for whatever reason you can't buy it, then I'd be happy to fax or post you a copy.