Vladimir Smirnov brought along his 4-year old son. Bad idea. The kid was a handful and made a lot of noise. Even Ingela Eriksson had to be roped in as babysitter. Sadly, it was all too much and Vlady had to withdraw.

An interesting addition to the local scene is one Aina Musaeva (rated 2094). She hails from Russia and will be living here permanently. If I listen any more to her melodious accent, I think I might just ask her to marry me.

In round 1, Norm Greenwood pulled off an almost unbelievable upset. He downed the young 2000+ rated Ilya Zvedeniouk. Here is the game. 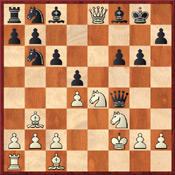 In the third round, the Pinoy player and Australian Masters champ, Sales, dropped a piece early against Bolens. Lucky for him, Bolens - a usually reliable trickster himself - played a bit nervously. Sales managed to simplify leaving himself with a Rook versus Bolens' Bishop and Knight combo. Sales eventually won. He summarised the encounter as, "Shit, tough game!"

I'll try to bring you that game later, but for now, here is Sales against 1817 rated Watson, in round 2.