Blast From The Past

It was only a matter of time before I receive my first complaint. Too much chess politics! Well, alright. So tonight, I thought I'd flick through some old Chess Worlds. Blasting to 1947 I spot a game from the Victorian Championships. That tournament was won by a Dr M. Gellis. He finished on 9.5/10 - a half point ahead of F.A. Crowl.

The featured game is between C.G. Watson (white) and the tournament winner (black). Gellis was lucky thanks to Watson's horrible blunder on move 40. 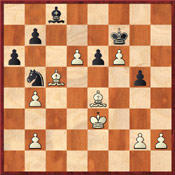 I am not sure how bad 40 Kd4 is, but I can assure you that 36 g4 tells me that white has no idea about how to play endings. Playing h3, g3 and h4 will create a pass pawn and the game will be finished in a few moves.