GM Ian Rogers is the top seed in the 2007 NSW Open. There are 107 players in all which does seem like a lot but I don't know if that's actually enough to break even. Hopefully it is.

When I left the venue this afternoon the second round was just starting. Not much to report other than to show off this nice little efficient win by the top seed against local player Nick Kordahi. My friend Nick played a terrible move long before the start of round one today. He was one of the guys I was with in the Art House last night and we all had a little too much to drink!


Meanwhile, down in the Victorian Open, Pinoy player FM Jesse Sales had a shocker of an opening round when he lost to 1591 rated John Beckman! That's an awful result of Jesse.

Ian Rogers' main challenger will be GM Dejan Antic. He is seen here in action against Alex Mendes da Costa in round two. 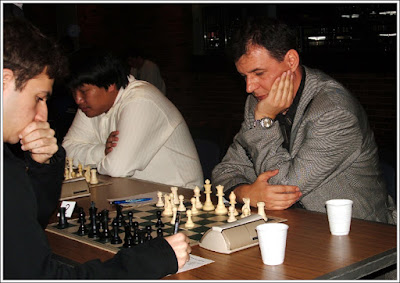 Posted by The Closet Grandmaster at 9:13 pm

What facts are you basing that on num nuts

The (3rd ANON from the TOP) said the Vic OPEN loses money.
I don't think he read that anywhere, and I don't know who he spoke to.

The facts are that the budget was set assuming about 80 entries; then the entry cost and prizes were calculated to show a small profit after other costs were covered. We had 80 entries and so it went to plan.

Players and visitors did support the event.

I think ANON.must be letting Melbourne's grey weather get to him. Lighten up a bit friend.

I agree Moz. In Victoria we dont let tournaments like the Vic open run at a loss,its a matter of pride.

The Vic open is a well supported and well run event.