What exactly did GM Paragua eat? Maybe he had some of that local hot curry. Whatever it was, his play against compatriot Barlo Nadera left the board ablaze. The attack was unrelenting, prosecuted with such an intensity of young man screaming, "Paragua in da house!" In the following position, what would you play? 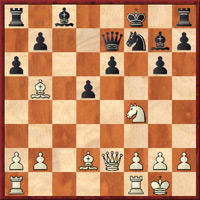 On board 1, Roca did not survive against Vietnamese grandmaster, Dao Thien Hai. And the same fate befell Torre - losing to Indonesia's Edhi Handoko. For the rest of today's results, check out Gilachess' website.
Posted by The Closet Grandmaster at 5:47 pm