Strange, mysterious, baffling. Those were just a few of the adjectives thrown about yesterday either here in the playing hall or on the net. First, who can really explain Gawain's 15-mover disaster against Mikhalevski? Essaying the Benko, and with the Israeli declining that second pawn with Shirov's old favourite 5. b6, the Englishman seemed to forget that old dictum: a lone Queen make not an army. A pawn down and sans development Jones opted for the only move. Indeed, in my view, an honourable move: resignation. There was no point bashing out useless pushes here and there against a 2600+ player. Doing so would have been an insult to the audience, to himself and, most of all, to Viktor.

After the loss there was no doubt that Gawain was terribly upset. He quickly walked out, passing the arbiters' desk as he crumpled his scoresheet in his palm. Whatever was on his mind yesterday, let's hope he forgets it today.

Second, how in the world did IM Smerdon win that? Yes, that one against Bischoff, where he was lost. Rozentalis thought so. I think even a complete novice would have thought the same. But such is the wonderful beauty of chess that anything can happen, decisions are made that lead to all kinds of possibilities. Thinking that the German was winning, Smerdon accompanied his 38...h5 with a peace offer. Bischoff declined, but his response of 39. Ree7 was clearly suboptimal. 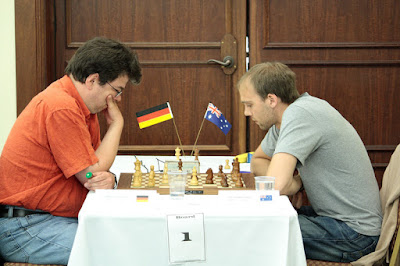 Bischoff - Smerdon, 0-1
Later, and I mean, way, way later - a number of woodpushers found their way to what is now our fave local - the Buffalo Club. Thursdays mean that it's "Buff Ugly" night when some guys and gals take the gear off to the delightful screaming of the other guys and gals. Some are too drunk to know where they are, let alone what exactly they're up to.

While this particular chesser may not have been entirely inebriated, let's just say brave, I can tell you that s/he stood there, on that bar, with just the undies and a wet t-shirt. As to their identity, my lips are forever sealed.
Posted by The Closet Grandmaster at 10:40 am