The Long and the Short

A quick flight from Queenstown to Christchurch, a few hours sight-seeing, another flight bound for Sydney, then home. For me, it was too easy. Some fellow travellers, however, weren't so lucky. While in Christchurch I ran into a bunch of Canberrans who actually drove for 8 hours or so all the way from Queenstown. They slept in Christchurch for a night, got on the same plane as me for Sydney, only then to follow-up that trip with another 3.5 hours of driving back to the capital. But, of course, even that cannot be as bad as the experience of our European friends who must now countenance at least a day of travel back to their homes.

Anyway, I just happened to be reviewing some games from Queenstown when, and this being Australia Day and all, I just couldn't help notice a peculiar coincidence. Both the longest and shortest games currently included in the available PGN involve Aussies!

The longest game features GM Darryl Johansen, with the black pieces, up against the new NZ champion IM Anthony Ker. After 62 moves, the following position was reached. 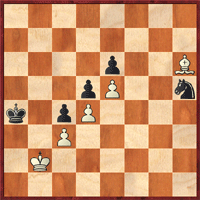 Of course not all games from the event have actually been entered yet which, we hope, will be corrected in no time at all. So it may be that we'll find another longer or shorter game in the collection.

Finally, before I really forget to say anything about it - congratulations must go to IM Anthony Ker for becoming once again New Zealand's national champion. It is his tenth! The only other man to have won it more times was none other than the late great Ortvin Sarapu.
Posted by The Closet Grandmaster at 10:04 pm

Hey the trip home wasn't that bad.....just so so tired from the final night party :) Ah good times!

Maybe it takes 8 hours to drive from Queenstown to Christchurch if you spend four hours in a country pub along the way.

Or if you go, say, via Invercargill or maybe Greymouth. But that would be like travalling
from Sydney to Canberra via Bathurst (or even Newcastle).

Someone should explain to the guy above that roads in NZ are not flat, straight, or wide...

Results from the Rapidplay and Lightning tournaments in Queenstown: