One of the world's great opens is on again - the 2009 Gibraltar Chess Festival. It's one of those tournaments that, I think, is really worth paying a visit one day. Maybe when all this global recession is over.

As you see in the list of admin staff, this year Australia's Manuel Weeks takes over from Stewart Reuben as TD. But there's another admin member that caught my attention, and given the recent discussions in Queenstown about the slow update of the PGN file, I thought it interesting. Gibraltar has a guy named Henning Friese who acts as "games inputter". Other organisers should take note.

Anyway, we already have some hot action from round 1. Here's a top seed nearly losing his head. What would you play as white? 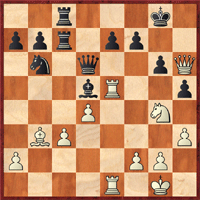 Position after 23...Kg8
The game eventually ended a draw thanks to white's incorrect continuation later on.

For those who like to stay up late (or wake up early) live games are available here from 0100 Sydney time, while GM Conquest provides commentary here.
Posted by The Closet Grandmaster at 4:29 am

Victorian Ibrahim Ogada-Osir plays in the tournament. He just lost to GM Ulf Andersen in round 3.