It's a winto Earth. 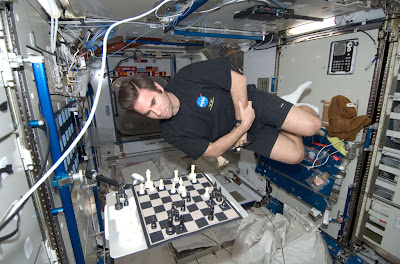 Photo courtesy of NASA
Posted by The Closet Grandmaster at 3:02 pm

It may be the first game (not "match" of course) between "the earth" (well, those knowing enough about the match to vote in it) and space but it is certainly not the first match between someone in space and someone on earth. In 1970 two Soviet cosmonauts played against a team of a Soviet cosmonaut and a Soviet Air Force general who were stationed on the ground. Game can be found here: http://www.chesscafe.com/text/hans57.pdf