Kudos to GM David Howell. In his round 3 game of the London Chess Classic, the Englishman held Magnus Carlsen to a draw. But not without a little oversight from the super grandmaster Norwegian. 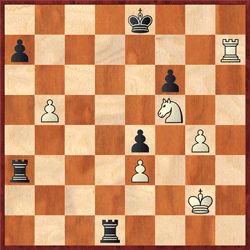 And this from John Saunders' press release:

As the players signed their scoresheets, Malcolm Pein took upon himself the lugubrious duty of informing the world number one what he had missed at move 52. Magnus took it pretty well, on the whole – a pained expression briefly crossed his face, and sotto voce he uttered the comment “that’s a bit embarrassing”. It broke his streak but he will come back refreshed after the rest day (Friday 11th). The last word must be for David Howell – he showed true grit to defend a horrendous position through two time scrambles. OK, ‘England’ lost the four-game ‘match’ by the odd point to the ‘Rest of the World’ but I think David’s performance on its own deserves the singing of a few choruses of the country’s favourite footie chant. Altogether now, everyone, there’s only word to learn: "Eng-er-land!, Eng-er-land!, Eng-er-land!..."

Meanwhile, Caoili still leads the Women's Invitational by a full point, on 4/5, despite her expected setback against IM Susan Lalic. The good thing is that games from the women's are now available and can be viewed here.
Posted by The Closet Grandmaster at 10:21 am

16 thousand views!
That is impressive :-)
Whatever they say about Carlsen's game 3, it was not exactly a clear win, now was it?
Actually, I think his opponent simply bored him to death with the Alapin. That's why he didn't win.
2 rooks vs 1 rook could take a while.