Australia's WIM Arianne Caoili finished outright first in the London Chess Classic Women's Invitational with an emphatic 8 points from nine games. Her nearest rival and the only player to steal a full point was IM Susan Lalic who ended the tournament with 6 points.

For Caoili, it was yet another successful campaign after her win in the women's Oceania Zonal earlier this year. And for the Aussie selectors, the only question that matters now is who will fill boards 2 to four in the next women's Olympiad team.

In the main event, GM Magnus Carlsen was victorious finishing with 13 points ("football scoring system" in case you're wondering), while Kramnik secured second place with 12. 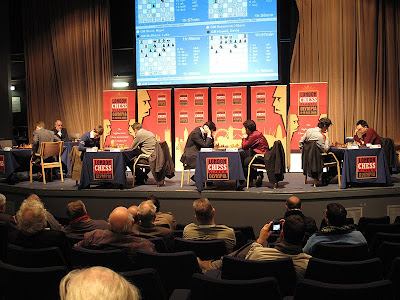 Last round. Photo courtesy of John Saunders
Chessvibes has a vid interview with the winner here. And by the way, a mate of mine keeps telling me that Carlsen once called Kasparov an idiot.
Posted by The Closet Grandmaster at 5:05 am

Actually boards 2 - 5 as both Open and Women's teams now comprise 4 players and 1 reserve.

That aside it's a fine result for Arianne.

Why on earth wasn't she playing for a norm and some real experience in the FIDE Open?

What can you expect from someone with Aronian as his second?

"Aronian as his second" - Last time i checked Arianne was a woman. She has to make the moves not him so instead on demeaning other people's achievements why dont you get off your sorry backside and do something constructive with your life.