One Move at a Time

Today began with a visit from IM Alex Wohl. He dropped in at the hostel to take Arianne on her morning jog. Of course, being the keen blogger that I am, I could not resist asking a few questions. We talked about religion, chess, and (believe it or not?) credit cards!

About chess, he game me this tip. Just take it one move at a time. The thing to think about is to make sure that they next move you play isn't a blunder.

None of that must have entered my thick head because today I managed to draw with a player rated some 400 points below me. In fact, the draw was complete luck. I'm certain that my opponent, the junior player Emma Guo, had a win somewhere. I think, perhaps, I should stick to photography.

Sadly, I arrived late at the tournament hall this afternoon. Thus, I took only a handful of shots. According to the convention, flash photography only in the first 10 minutes. Anyway, I did manage to capture a couple of moments in the Chandler - Wade game. It was a tense game with Chandler's clock ebbing very close to zero. And quite amazingly, Wade still had at least 60 minutes left. But with the time control at 100m + 60s [per move from 1], Chandler had little risk of losing on time. He just had to play something decent. The game ended a draw. During the post mortem, Chandler graciously acknowledged Wade's performance.

"You played very well Bob, I have to say", said Chandler. 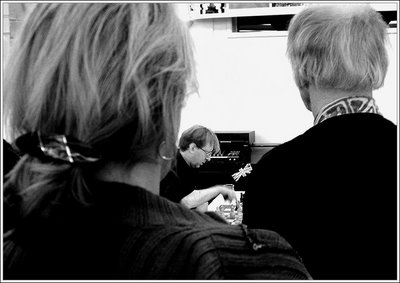 In Ly - Rogers, the players had a nice moment of humour between themselves. In the last few moments of the game, Ly teasingly moved his King to a losing square, but without completing the move. Both players smiled quietly to each other. It was rather nice.
Posted by The Closet Grandmaster at 6:07 pm

Can you give us some link so we can follow this tournament?