After "preparing" for a good two hours today against Bob Smith, I had to lose! I'm just beside myself. I saw nearly the same lines my much stronger opponent did - but, for whatever reason, I just chickened out.

Mr Smith is an Olympiad representative for NZ and I desired nothing more than to score a win against him. So, I frantically went through some of his games. I noticed that against 1. d4, he has a wide array of defences. But against 1. e4, he responds with either 1...c5 or 1...c6. I thought, well that makes it easy. There was only one problem. I never play 1. e4 or, at least, very rarely.

Also, I noticed the game Charles, G. - Smith, R.W. at the Auckland Zonals last year. For whatever reason, I had this feeling that Bob will reel out the Najdorf. And so...

As I promised, I will be posting pictures on a daily basis. Click on the image below to go to my flickr album. 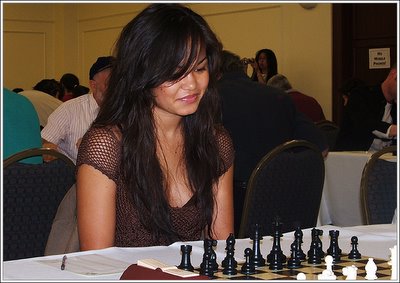 Posted by The Closet Grandmaster at 6:41 pm

You never told us you're going to play this tourney. Good luck!!

Great to see one of your own games posted here!!

I've also posted your game using javascript board on my blog at http://gilachess.blogspot.com

It's experimental. Hopefully it works and I can post more javascript animated boards like these on blogs more easily in future.