And yet another foreign visitor walks away with a local prize. International Master Alex Matros, from Russia, won the NSW Rapid Play tournament today with a score of 6.5/7. In the seventh round Matros settled for a grandmaster draw against local player, Lee Jones. The director of play wondered, "Did you guys actually play a game?" 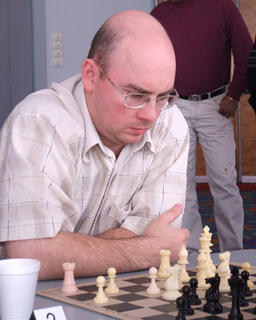 IM Lane is a friendly fella. A genuine gent at the board and never too good to say "hi". But beware anyone who plays him. For let me tell you, all that near-2500 of horsepower will go straight for the jugular. In the fourth round, he went on a rampage making Puzon look like a puppy. And, as if that wasn't enough, in the final round he shut out Pinoy hopes by defeating Ed Agulto in lightning time. The clock was stopped at (Lane) 20:00 - 19:43 (Agulto).

But on this day, the second seed was in hotter form. In the 6th round Matros-Lane match-up, the Russian relied on his trusty 6. Bg5 variation against the KID. Lane had trouble straight out of the opening causing him to solve too many problems and expending too much time. Under enormous pressure, the Aussie eventually succumbed to a brutal fork.

Actually, this 6. Bg5 variation had its first appearance in round 4 against Vladimir Smirnov. And it is the same variation with which Matros vanquished GM Igor Nataf at the Rilton Cup way back in 1999. The opening moves were: 1. d4 Nf6 2. c4 g6 3. Nc3 Bg7 4. e4 d6 5. h3 O-O 6. Bg5. White will play g2-g4, open up the K-side, castle long and deliver mate. Against Smirnov, Matros finished with a gorgeous Arabian checkmate.

Other notable performers were Kerry Stead, Smirnov and Pedro Kirchnei. Kerry's comeback against Agulto was almost unbelievable. At one point, the Pinoy player looked to be cruising to a sure victory, so I stopped watching. Some minutes later, Kerry suddenly had a battery aimed directly at Agulto's throat. It was over soon after that. Smirnov, on the other hand, was in an aggressive mood all throughout. He spent the day handing out lessons to anyone below 2000. While Kirchnei scored an upset win against City of Sydney Rapid champ, Jason Chan.

Mal Murrell directed the event. He sure had his hands full. Some players seemed a little confused over illegal moves. If a player made an illegal move, could a player claim a win? And Frank Kresinger, again, was in another dispute involving the time control. He wondered why his time kept falling while his opponent's kept increasing. It never seemed to occur to Frank that his opponent was moving fast! Finally, Mal ejected a spectator over the mobile phone rule.

And that was that. For photos of today's event, visit my flickr page or The Kibitzer.

EDIT: The New South Wales Chess Association has now provided a report on their website.
Posted by The Closet Grandmaster at 8:08 pm