In the last round of the Malaysian Open, Wang Hao vanquished Australia's GM Ian Rogers. According to the official website, the game opened with the English (1. c4 e5), with Rogers as white. By move 19, the following position was reached. 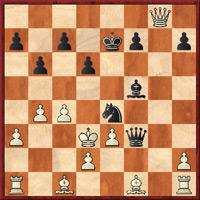 Rogers
It's mate in 5! Thankfully for Rogers, the Chinese player missed the winning combo. But with a poorly positioned King, Rogers eventually resigned on move 27.

Good news for Pinoy fans is that IM Jayson Gonzales performed well enough to earn a GM norm. It is his second, having earned the first one at last year's Olympiad. While Rogelio Antonio is reported to be responsible for one of the most beautiful games of the tournament by sacrificing his Queen and thus forcing mate. Gilachess, the Malaysian blogger, has promised to post some games. I've asked to include Antonio's.

CORRECTION: In previous posts, I had referred to Wang Hao as a grandmaster. In fact, he is not. But his performance in the Malaysian event does earn him his final norm.
Posted by The Closet Grandmaster at 11:24 pm

btw. my email address is goranurosevic@gmail.com

Yes, got your addy. Thanks