James Morris at the Games

Current Victorian Under 14 champion, James Morris was the honourable guest today at the Commonwealth Games village in Melbourne. He was there to play a simul against all comers, mainly the athletes. 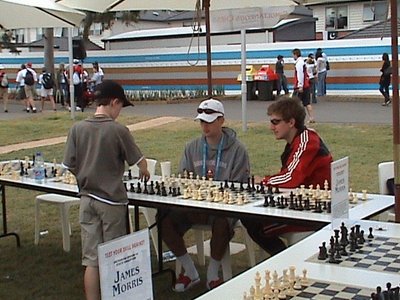 James, seen here playing against a Canadian athlete
Amidst tight security, the simul was played in a relaxed atmosphere. Accompanied by mom, Rowena Moyle, James thoroughly enjoyed himself. The young man quickly made friends with the Canadian hockey team as well as swimmers from Mauritius. The Canadians apparently kept coming back out for more.

I met James early this year and he is a very friendly young chap. Maybe that explains why the volunteer helpers gave so much support and even provided James with a hat as a memento!

Says Rowena, "I was very proud ..not only that James was asked but that he was a good ambassador for Australia, Melbourne and Australian Chess."

The event was organised by Gary Wastell and Chess Victoria with the specific aim of promoting the Australian Olympiad Team. Unfortunately, there was no media present to cover the event. And Rowena informs us that they were not allowed to mention the Olympiad due to Commonwealth Games regulations. 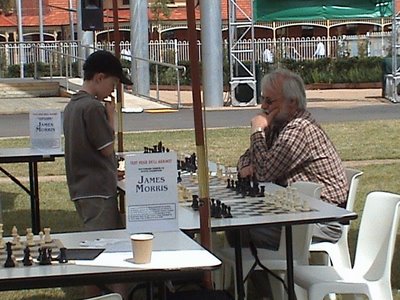 There will be more chess players visiting the village. They will be there next Wednesday and the following Saturday.
Posted by The Closet Grandmaster at 8:03 pm