A Chess Set for a Queen

From tomorrow until 30 September this year, Buckingham Palace will hold the "Queen & Commonwealth: The Royal Tour" exhibition in honour of the so-called London Declaration's sixtieth anniversary.

From the official website: "The exhibition includes over 100 gifts presented to The Queen by the people of the Commonwealth, to mark the important principle of friendship that underlies Her Majesty’s visits."

One of those gifts is a very nice chess set made from painted ceramics. It was presented to the Duke of Edinburgh in 1996 by Nelson Mandela during his state visit to the United Kingdom. 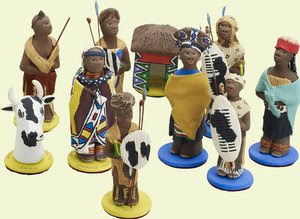 But even more impressive is this absolutely gorgeous Wattle brooch, a gift from Aussies, that is made of diamonds. Stunning!
Posted by The Closet Grandmaster at 6:38 pm