Guess who's back in Sydney? It's Pablo Williams. He was spotted in Pitt St today putting on his usual theatrics. Except this time, he's no longer describing himself as the Jamaican Chess Champion.

Another change is that he now has a partner, apparently an ex-school chess champion herself. "Free game of 3-minute chess against former primary school girl chess champion", reads another poster. Here's a shot of her in action. 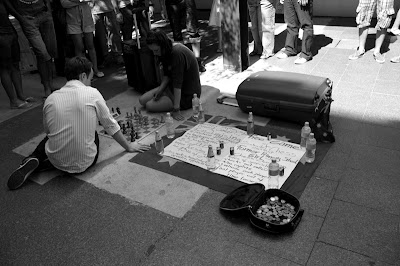 Whatever we may think of Pablo's antics, the guy is certainly living the life - just ping ponging from country to country. I understand that he's been to 36 nations over the last couple of years. Who wouldn't want to do that?
Posted by The Closet Grandmaster at 6:16 pm

Any idea of the girl's name?

You will note that Paul Williams, aka Pablo, is listed as playing in the Queenstown Classic. Presumably that's why he needs the money by the 13th...

Hmm... with a girlfriend in tow it should read 'Madagascar 2'

Gorilla's in the mist?

I still remember his dummy spit when beaten by Andrew Brown in the Doeberl.

The cacophony in the street outside the Italo-Australian Club, along with the tears, was something to behold.

Anybody has any idea where Pablo is now? I played with him when he was in Singapore and I had such a great time :P

I just blogged about him and placed a link back to this page :)

nice greatings to u closet grandmaster from pablo and me ,was nice to meet u ciao