Now in London. Yesterday, I dropped in on The Photographer's Gallery (16 - 18 Ramillies St, W1) where I also bumped into Nigella Lawson. I quite like photography, you see, and spend plenty of time in places with a good image collection. If you happen to also like this art, I recommend having a browse here, here and here.

In Paris, where I've just been, I trained my camera mostly on people instead of the usual touristy things - like buildings, etc. Funnily enough, one of my most popular photos in my other Flickr stream is that of a dog performing the number two in the middle of a Parisian street! 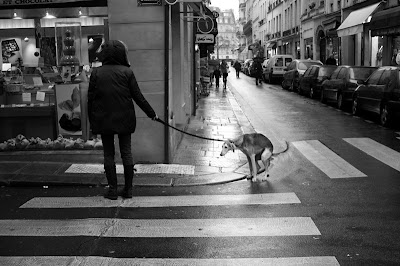 Action shot of dog in Paris
I'm going about this because I want to say a word or two about chess photography.

Firstly, Chessbase ought to be absolutely condemned for their so-called "pictorial" reports. They are not pictorial. The photographs of players alone are decidedly barbaric in the extreme due mainly to that awful use of flash. Never mind that there is simply a lack of composition. In Dresden, I witnessed some of these guys with big expensive equipment pretty much just shooting by pointing the lens in some general direction. Criminals!

Secondly, I must thank the Dresden Olympiad press staff for their thoughtful device: the one-day "field of play" pass that allowed a journo to enter the playing field after the first 15 minutes. This allowed me to go in and capture some photos just as when games became tense. To do so is important, of course, because it's during those tense times of a game when players show their best (and sometimes, worse) emotions. I don't know if the field of play pass was Dresden's invention, but tournament organisers the world over should emulate it.

After all, the critical and the best stories of a game of chess mostly ever occur after the first 15 minutes. We need to tell those stories also through photography.
Posted by The Closet Grandmaster at 6:56 pm

As a fellow photographer, I fully agree with your comments about the standard of chess photography coming from many of the major tournaments including Dresden - it's really very mediocre.

By the way, I hope you apologised to Nigella - or better still made something positive of it :-)

Yeah, if people want a point-and-shoot camera they can pick one up for $300 at just about any big store.

These days point-and-shoot digital cameras can be bought for somewhat less than $300 - even less than $100. But it's not so much the kind of camera that one is using as what one does with it. Very good photographs can be taken with a simple camera if the photographer is good enough.