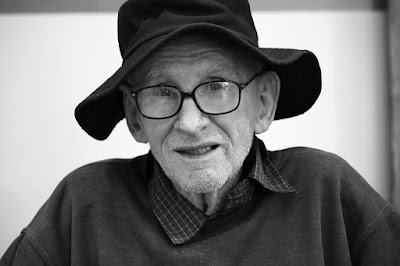 Without access to my old Aussie magazines, I cannot possibly do justice to his long chess playing life. But two details are worth a mention. First, he did not miss a single Doeberl Cup from 1963 to 2008. Second, he was also once a champion of draughts up in Queensland.

Doubtless many others will remember Lloyd for his often blunt manner of speaking, but I always thought that quality about him to be one of honesty. "You're a mug!" he would often dismiss people. If you got that, you deserved it.

He was also generous, giving away some of his chess books to juniors for example. And always willing to show off a few endgame studies that he would have learned a long, long time ago. Of course, let's not forget that even in the last couple of years of his life, he was always willing to offer his modest pad to accommodate visiting players from interstate.

I am proud to say that he and I crossed swords over-the-board. And yes, he beat me. Twice, if I remember right.

I will miss Lloyd Fell - a genuine character of Australian Chess.
Posted by The Closet Grandmaster at 12:39 pm

Lloyd gave me a lot of his old collection of chess books the very first tournament i ever played in australia when i was 9, he is awesome, we always had a good laugh and i'm gonna miss him!!

Long after I stopped playing competitively I was talking into playing a tournie at the fabulous East Rules club in Bondi about 1985, so he was a mere youngster in his late sixties. I prepared something completely obscure for my game against Lloyd, and after he beat me he said 'Hmmm. I've been playing this line in a correspondence game'...he was in analysis to move twenty or something.

Such an amazing guy.