We've got a couple interesting tidbits to end the week. First up is an item from the Indian Express: "[A] top-rated French player had to concede his game after he couldn’t sit through his match against his opponent. Reason — he showed up drunk at the venue, slept through his moves several times over, and eventually had to be carried off."

It's a rare thing to happen, I think, but it does happen. Read more in Drunk chess star dozes off, concedes match at Kolkata Open.

And then there's this. Is that Hitler against Lenin? 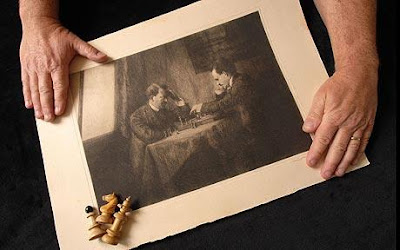 Photo: BNPS
This, along with a chess set, is now being offered on sale and is estimated to fetch up to £40,000. Not bad. Except that there is just an itsy-bitsy little doubt over the picture's authenticity. The UK's Tele paper has the juice.
Posted by The Closet Grandmaster at 2:59 pm