We've just learnt of this sad news that Australian chess legend John Hanks has passed away in Melbourne. Victorian player Malcolm Pyke made the announcement yesterday afternoon on Chess Chat.

I will try an update this post with a couple of Mr Hanks' games later tonight.

UPDATE: As promised, below is a game by John Hanks - a win over fellow Victorian S. Lazare at the 1948/49 Australian Championships in Melbourne. Hanks actually finished second in that tournament, scoring 9.5 points from 13 games, behind CJS Purdy who tallied 11.5 points overall.
On Hanks, M.E. Goldstein, reporting about the tournament in Chess World (February, 1949) wrote:

The runner-up, 22-years-old John Hanks, surprised players who had failed to realise the advance he has made recently, or judged his form by his result in the Victorian Championship in which he was out of practice. Well versed in opening lore, he can play a solid positional game or a dashing sacrificial attack (as against Armstrong and Lazare). Moreover, he is undoubtedly the best end-game player of the rising generation, as witness his flawless technique against Bowman and Shoebridge.

The following game occurred in round 10 and was judged winner, by a certain Mr. T.J. Edwards, of the first brilliancy prize in the tournament. (The second brilliancy prize went to Watson - Karoly, 1-0).
Annotations, including the symbols, are by C.J.S. Purdy but here I quote only the critical parts. I have also left intact the old school game notation within his text. For example, "N-B1" as a move for Black would be "Nf8" in our lingo.
1948/49 Australian Chess Championships
Hanks, John N
Lazare, Stefan
D36 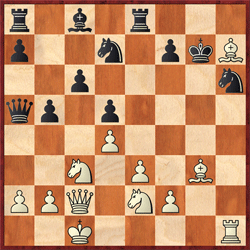 Position after 20...Kg7
21. Rxh6!! Purdy again: "And this second sacrifice, besides making the game a memorable one, had the practical advantage over the solid 21. R-N1 (which seems to win) of offering White a sure perpertual check if he found a nigger in the woodpile". [TCG: Yes, you saw the "N" word. The phrase even has a Wikipedia reference]. 21...Kxh6 22. Qf5 Kg7 23. Bh4? Purdy: "Courageously burning his boats. He had a perpetual with 23. Q-N5 ch, etc., but the proper winning move, as pointed out by Koshnitsky, was 23. N-B4!, introducing another piece into the attack." 23...Re6 24. Nf4 Rh6 25. Nh5+ Rxh5 26. Qxh5 Nf8?? Purdy: "An oversight in clock trouble leading to a pretty finish. After 26...Q-B2, the best chance, White again has a perpertual check but also a probable win by 27. N-K2! - again the motif of introducing new force rather than moving pieces already engaged in the attack." 27. Bf6+! Kxf6 28. Qe5# Purdy: "The error on move 23, which might have lost the game, spoils the brilliancy from an artistic standpoint but it was a most pleasing specimen of adventurous chess. Lazare's failure to proceed with his own attack on move 13 was very unlike him." 1-0
Posted by The Closet Grandmaster at 3:04 pm

In his Canberra Times obituary Ian Rogers mentions Hanks' propensity to write "20-page letters" on issues that attracted his attention. Not quite 20, but I received a densely written three-pager commenting on my having, as Editor of the Bulletins for the 2000 Australian Open in Canberra, presented the final position from Breyer's famous 50 move retro problem as a draw. Amongst much other interesting information re the history of the Open, John gently chided me: " I mention purely (underlined) as a matter of interest, that your remarks re [the diagram] are not really accurate. I can accept that in the position 50 moves with no capture or pawn moves have been played. But that does not (double underline) make it a draw. All it means is that White can (before making a move) claim a draw whilst on Black's last move, before moving, he too could claim a draw. As it is, White to move will win with ease." John then went on to provide some analysis to support his claim, finishing, "All draws have to be agreed or claimed - the sole exception is stalemate."
I think this provides a good example of John's courteous but firm commitment to accuracy. I'm not sure if it "cooks" Breyer's composition, which was a remarkable concept from any perspective.