Brilliancies from Down Under

(NOTE: TCG received a complimentary copy of the book, Australian Chess Brilliancies, for this review).

Chess books of the game collection category – best games, most instructive, most beautiful, whatever – are always beset with an obvious problem. That is, the difficulty in selecting which games to include in the first place. For the author it is a challenge firstly of defining some rules and hopefully persuading the reader to agree. And that’s without mentioning the sheer volume of games to examine, some of which lying dormant in old magazines. Such was the enormous task that author Kevin Casey set out to do.

The ex-American who now resides in the northern Australian state of Queensland has recently published a book entitled, "Australian Chess Brilliancies – Creative Attacking Chess from Down Under". In it Kevin, himself a master level player and, would you believe, an ex-champion of Alaska (1980 and 1981) presents 29 games (this odd number is unexplained) which he describes as “some of the finest and most creative attacking games ever produced by Australian chess players”. A pretty big claim if ever there was one!

But first, what exactly is a “brilliancy”? According to Casey it is “a game which features spectacular attacking play, unexpected sacrifices, stunning moves and a very high level of creative imagination.” To make his point clear he cites Polugaevsky – Nezhmetdinov, 0-1, 1958 Soviet Championships and Cifuentes – Zviagintsev, 0-1, 1995 Wijk aan Zee as examples of this definition, then includes a couple more that came close but no cigar. These latter examples are described as “error-rich-almost-brilliancy”, “pretty-but-not-really-necessary-sacrifice” and the “might-have-been”. Also out were games played at rapid and slower time controls.

In a prepared Q&A Casey says, “I was really quite brutal in the culling process. I waded through an absolute ton of games, many virtually unknown (even to Australians), and extracted a scant few of the very best. From the beginning my aim was quality, not quantity. I place a high value on soundness, stalwart defense, sheer ingenuity and originality in the attacking concepts. And yes, a stunning and totally unexpected move that rocks you back in your seat while you’re playing over the game certainly has its place too.”

So how did he do? Very well, in fact, but I have a couple of complaints.

Right from the content page I couldn’t help notice that among the whole collection of twenty-nine games chosen by Casey only 2 were from the 70's, 6 from the 80's, 13 from the 90's and 8 from the noughties. That’s right – none from the 19th Century to the 1960’s! Surely, I thought, the great champions of the past must have produced at least one or 2 gems that satisfied Mr Casey's demanding standards. Well, evidently not. Names like Jamieson, Koshnitsky, Hamilton and Steiner are nowhere to be seen. But hey if they didn’t play a brilliant game according to our author’s definition, then I suppose that’s fair enough.

Still, I really must show this little old classic. Either it was never considered or made it only as far as Mr Casey’s cutting floor. J. Stegert, in the January 1968 issue of Chess in Australia, considered it as “possibly the greatest match-game ever contested between Australian masters.” 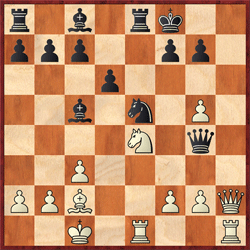 My second complaint is that two games just didn’t really feel like they fitted in. These are Solomon – Harris, 1-0, 1998 Hervey Bay Open (game 7) and Georgiev – Rogers, 0-1, 1993 Biel (game 15). Both these games, while definitely blessed with beautiful finishes, just seem a bit, I don’t know, simplistic. In the Solo game the attack is a familiar routine, while in the Rogers encounter the Aussie GM delivers a Bishop sac that immediately forces surrender. So what? Big deal.

Finally, and this is a minor complaint, Casey could at least have included a list of sources - be they databases, books, journals or whatever. I tend to look at this to compare notes on the analysis, for example, or just to see what books might actually be worth purchasing for my collection.

All that said the rest of this book is a fine collection of truly wonderful contests, gorgeous sacrifices and ultimately, brilliant games. Plenty a times we have seen Rogers – Milos, 1-0, 1992 Manila Olympiad, but here it certainly belongs in Casey’s book. And if you cannot get enough of this game’s inner secrets check out also GM Christiansen’s discussion over on ICC (user credentials required).

There is also Reilly – Leskiewicz wherein black, the Aussie junior champ in 1997 (whatever happened to him?), stuns his opponent with the most unexpected Queen sacrifice. Not one to be outdone as far as Queen-sacs go, check out game 24 where we see the then 15-year old IM David Smerdon abandoning his Lady against no less than IM Stephen Solomon. That epic battle is amply narrated by Casey and I must thank him for this as it's the first time that I've seen this game. An amazing encounter.

Now I understand that IM Greg Hjorth is back in the country after many years of teaching at UCLA. What better way for us to acquaint ourselves with his chess talents than with game 14, Hjorth – Johansen, 1-0, 1983 Commonwealth Championships? There’s a lesson there about long diagonals.

All in all this is a book worthy of inclusion in anyone's chess library. Given the rarity of books about Aussie chess, local readers should simply buy this as a matter of instinct. And foreigners, too, could also learn something about chess Down Under. Casey in his prepared Q&A: "This is a games collection rather than an instructive chess manual, so its primary role is entertainment and as an historical record of great Australian chess games."

Finally, let's take a look at a game from the book. While there are certainly many to choose from, this one is my fave. 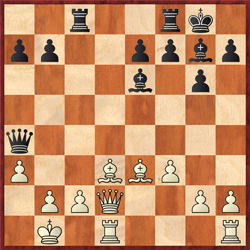 So how could such a game make it into the book?

25.Nf6+ immediately loses to 25...Be6, blocking the check & defending the e8 rook with the rook on a8 when you are simply a queen for knight down.

This old game is an fairly nice effort indeed. Had I known of it, there's a good chance it would have been included in the book.