A special guest this afternoon in the press room was none other than Veselin Topalov. He covered a number of interesting topics including Bulgaria's run here in Dresden, his loss to Shirov yesterday ("I missed a move"), Gata Kamsky and a brief discussion on his career. 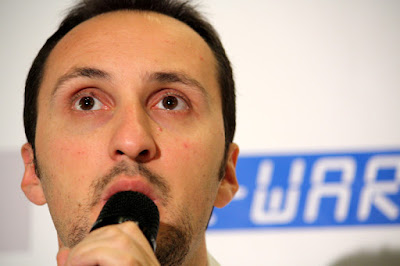 Veselin Topalov, Photo by The Closet Grandmaster
In light of today's latest news about the Grand Prix, ChessVibes' Peter Doggers asked Topalov about what he thought was the perfect system for a world championship.

Topalov: "No, I don't think there is a perfect system...Knock out is OK, tournament is also OK, also match system is also OK. But once we have this cycle I think it has to be finished.

I mean what FIDE should do is run the cycle [that] they designed, they promised and then change if they want to. You cannot change every two months because players make plans. This is basically what they have to do. I guess they have to run the tournaments and then to have the winner of the Grand Prix, 2009 World Cup match, and then change the world champion. I think this is what they have to do as they promised. And then OK, after 2011 maybe some change but I don't see a reason now there should be any new changes. Because we've had enough!"

Then later added, "The worse thing you can do is to change the rules during the same cycle like it already happened many times."
Posted by The Closet Grandmaster at 1:15 am

Closet Grandmaster,
It was brief, but nice to meet you in Dresden.
Thanks so much for coming to our party too!
I like your blog, definitely going to add it to my Favorites :-)
Best wishes, Ruy Mora

Did Topalov really say this with a straight face.

He is complaining about too many changes to the world champ cycle when he wanted to change it when it suited him and he was the main beneficiary of the previous change.

Sometimes peoples hypocrisy either makes you laugh or cry.