At this juncture of the event, Australia is normally ahead of their New Zealand cousins in the Olympiad rankings. But after 8 matches, the boys from Down Under are in 75th spot, while the Kiwis are up, up, up there in 43rd place! As if that wasn't bad enough, the NZ rugby league team overnight delivered a massive beating to the Kangaroos, 34-20. OK, league is pretty much an irrelevant sport, but c'mon! The stars must be seriously misaligned.

In yesterday's match Australia faced off against Bosnia Herzegovina, the very team that New Zealand defeated the day earlier. The question was: can Australia attain a similar result? On board 4, playing against IM Zeljko Bogut, GM Johansen gave Aussie fans reasons for rapture. His play was calm and methodical. We take you now to the crucial moment. 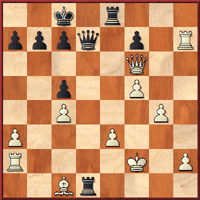 The other men drew their games but Oz still go down 1.5-2.5. Meanwhile, and doing their bit to salve our heartaches, the girls blanked out the Barbados team four-zip. Canberra's Shannon Oliver must be happy. The party girl's grounding has finally been lifted after winning her first ever Olympiad encounter.
Posted by The Closet Grandmaster at 8:59 pm