As I think I mentioned in one of the live blogs, Dresden has really made an effort for the Olympiad. Moving from place to place is a painless operation thanks to well designed brochures that point out exactly what tram or bus to catch. The trams themselves even make special announcements in English. Everywhere around the city you'll also find posters welcoming visitors in various languages. The other night, while we were walking around, IM Smerdon spotted a poster with a particularly interesting design. "That's gotta go on the blog", he suggested. And so here it is. 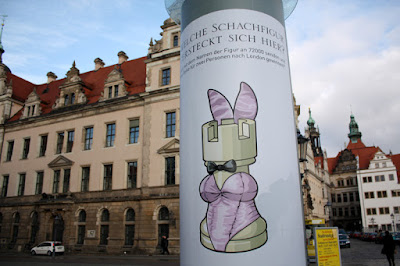 It is at least better than the official Olympiad poster which, frankly, is too plain and awful. Once upon a time Olympiad posters were a big deal and became collectors' items. There are a couple of good examples here as well as from other events. However, as bad as the Dresden poster is, I'll probably nick one or two of these just for the fun of it!

Posters aside, the Australian men's captain has a pressing problem other than anything chess related. The lack of good coffee in Dresden! Actually, I have the same problem. After having just visited cities like Madrid, Rome, Vienna and Berlin, where good coffee is plentiful (albeit never quite reaching the heights of truly excellent coffee in Sydney), Dresden has been a serious shock. It's like being back in London where its uneducated citizens worship the likes of the C-grade Starbucks who serve mostly water, no coffee. Were it not for Flat White (naturally, opened by expat Aussies and Kiwis), I'd die everytime I'm in London.

Thus, this morning the men's captain, Manuel Weeks, ordered no less than IM David Smerdon himself: "Find me good coffee!"

But today, a strong shot of high-grade caffeine shouldn't be needed. Manuel's team take on Guernsey - not exactly a happy pairing. The boys would really rather take on a stronger side. On the other hand, the women's team earn themselves a respite as today they face El Salvador. None of the Salvadorians are over 2200+, but the utmost care should still be taken.

I think I might also keep an eye on our Kiwi friends. Chandler's side are playing the powerful Slovenians and I'm sure our souther cousins will be out for blood. If for nothing else, but to finish above the Aussies. Well, we can't have that!

Seriously, good luck to all teams.
Posted by The Closet Grandmaster at 9:04 pm