While we have a number of US-based readers hitting the blog, thanks to Mig, here's a tidbit from the round 5 press conference.

Asked by FM Mike Klein for his opinion on the recent US election result and whether or not it has increased or decreased his chances of moving to the Canadian federation, grandmaster Nakamura replied: "Oh OK, that’s a very loaded question to ask. I think a lot of it depends on it [the election result]. I think that based on what I’ve seen, of course, since I grew up I was 12 back in 2000 when Bush was elected president, based on what I’ve seen in the past 8 years, I’m not very optimistic about the future." 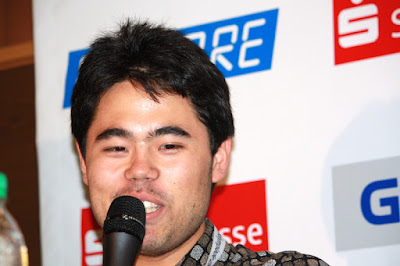 GM Nakamura (USA), Photo by The Closet Grandmaster
"I know right now there are a lot of problems. There’s a housing crisis and then the financial as well. So, the election has played a role, but it’s not like the biggest thing necessarily. I mean, there a lot of people I know in Vancouver and so right now I guess I’ll be staying out there for the time being."

"Whether I change to Canada or not, that’s up in the air. I’m not going to say yes or no either way because I really don’t know myself."
Posted by The Closet Grandmaster at 8:18 pm