Debate Over Isle of Lewis Chessmen

One of my favourite places is the British Museum. I shall never forget my first visit there a couple of years ago, seeing for the first time things that I'd only ever read about. The Rosetta Stone, the Elgin Marbles and a large collection of centuries old samurai swords were unforgettable. No less impressive, of course, is the central Reading Room (which houses the Paul Hamlyn Library). Yet besides the feeling of wonderment was the sense that much of it were out of place, stolen from elsewhere. To this day, for example, debate at times erupts over the Elgin Marbles. Should they be returned to Greece? And now a mild controversy along similar lines is taking place between the BM and, this time, Scotland. 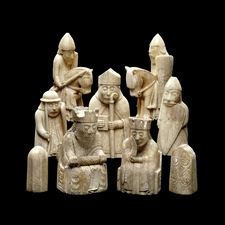 This morning I heard a news report on BBC radio about one of our game's greatest known treasures, the Isle of Lewis chessmen. Of the 93 pieces only 10 remain in Scotland, where the artefacts were first discovered way back in 1831, with the larger bulk being housed in the British Museum. Effort is now underway to try and return the chessmen back, according to the Scottish side at least, to their rightful home. In this report from Scotland on Sunday, Scotland's First Minister Alex Salmond is quoted as saying, "I find it utterly unacceptable that the Lewis Chessmen are scattered around Britain in a bizarre parody of the Barnett Formula. And you can be assured that I will continue campaigning for a united set of Lewis Chessmen in an independent Scotland".

So, what's your take? Should these chessmen be returned to Scotland?
Posted by The Closet Grandmaster at 9:27 am

The chessmen issue is a not issue. It is simply a matter of a politician looking to promote himself.

I believe so too. I should have mentioned that Mr Salmond is leader of the SNP, a party whose aim is Scottish independence.

Well, they were made i Norway. Maybe that is were they should be "repatriated"?