The latest info from KL shows that WGM Ruofan Li of China Singapore is the current sole leader in DATMO on 4 points. She's having a cracker beating IM Hafizulhelmi Mas and GM Murray Chandler in the fourth and 3rd rounds respectively. IM Gary Lane is right up there with the leaders on 3.5 points. Also on three-and-a-half are Pinoy players Hamed Nouri and IM Barlo Nadera who will play each in the fifth round.

Note that Melbourne player Geoff Saw is not actually a participant in this event. I listed him here but only because the official site clearly indicated him as a registered player. In fact, I can still see him being paired against Justin Tan for the first game. By the way, that's Justin Tan of Melbourne - not the now "old" JT of Sydney! 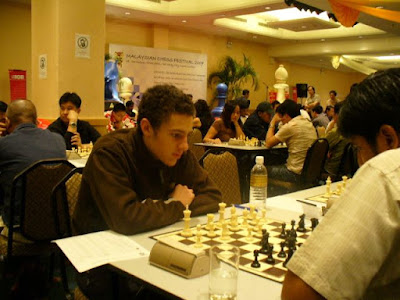 Victorian player Chris Wallis. Photo courtesy of official site.
And lastly, readers will also notice that IM Wesley So has dropped off! It now turns out that he's suffering from chicken pox and obviously had to withdraw from the event.
Posted by The Closet Grandmaster at 5:56 am

Geoff will be there to coach his kids. I understand Tibor Karolyi is there as a second for Laura and Brett.

Who are Laura and Brett? What is their gender, rating and age?