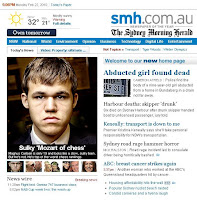 From the Sydney Morning Herald:

Initiated into chess early on by his father, as a boy Magnus nevertheless preferred other pastimes that he explored on his own.

Aged two, he could recite all car brands; as a five-year-old, he built monumental creations out of lego; then he moved on to memorising the world's countries, their flags, capitals, and areas.

But he was soon brought back to chess by the desire to beat his older sister at the game.

Read in "Sulky 'Mozart of chess' the new Kasparov".
Posted by The Closet Grandmaster at 2:31 pm

It's funny how the SMH has chosen Magnus Carlsen's saddest picture ever, not exactly portraying a possitive image of chess...
Also interesting is the fact that the image appears in the "Culture" section of the SMH, as we know, chess is not a sport in Australia.
But then again, does the Ministry of Culture and the Arts give any real subsidy to Chess Federations in Australia? er... no way! :)
You see, if you don't classify chess as anything, you don't have to subsidize it! that way, the Ministry of Sport can say: no, it's not a sport, try Culture. Culture can say: nope, it's not exactly culture, try sport, or science, or education, or... :D