I woke up this morning to the ABC's Newsradio and they had a report on the first ever World Chess Boxing Championships in Berlin. It was an audio-only version of the BBC's video report that you'll find here, while the text is here. 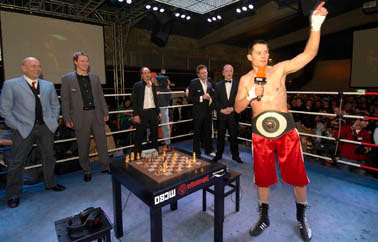 Photo from WCBO site.
Congrats to German police officer Frank 'ANTI TERROR' Stoldt for winning the event! He won via a checkmate in round 7, apparently with "only seconds to go".
Posted by The Closet Grandmaster at 6:20 am