It is an absolute chess fest in the Philippines at the moment, with tournaments just about every week. Tomorrow, the 2006 National Inter-cities Championships will begin in Davao City. Some 50 teams are participating. 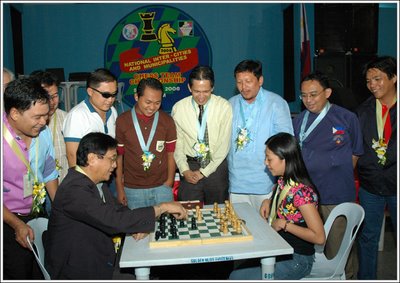 Posted by The Closet Grandmaster at 9:27 pm

Hhhmm...I just copied the names list according to how my source provided them.

Anyway, thanks for the tip. I'll correct some time today.

Regardless, nice pleasant news for a change on RP's top GMs Paragua and Antonio actively taking part. Any other GMs playing? Torre too?